Working within such multilateral frameworks only way to solve transnational challenges, he says at BRI forum

As a strategy that promotes trade and connectivity, the Belt and Road Initiative (BRI) can play a crucial role in strengthening cooperation between countries, Prime Minister Lee Hsien Loong said yesterday.

It is coming at a time when the world is seeing a pushback against globalisation, and growing distrust of governments and public institutions, making it harder for countries to work together, he said.

But working within such multilateral frameworks is the only way countries can solve the many complex transnational challenges they face, from terrorism to climate change, PM Lee said at a high-level meeting during the second Belt and Road Forum in Beijing.

"Both countries and their problems have become so interconnected and interdependent," he added.

"All countries, big and small, rely on a stable global order on which we can cooperate productively, resolve disputes peacefully and work together on new areas."

The Prime Minister is on a five-day visit to China, where he is attending the forum for the first time.

He spoke at the meeting along with other world leaders, including Thai Prime Minister Prayut Chan-o-cha and Philippine President Rodrigo Duterte.

Both countries and their problems have become so interconnected and interdependent. All countries, big and small, rely on a stable global order on which we can cooperate productively, resolve disputes peacefully and work together on new areas.

The BRI, a plan to revive ancient overland and maritime trade routes connecting China to Europe, Africa and other parts of Asia, is the signature foreign policy and development strategy of Chinese President Xi Jinping.

Part of the strategy includes building a network of ports, railways and trading hubs. In doing so, the initiative addresses the need of many countries for better infrastructure and connectivity, said PM Lee.

"Better infrastructure will enhance trade and economic cooperation not just between other countries and China, but also with one another," he added.

Singapore was an early and strong supporter of the BRI, with its participation focusing on infrastructure and financial connectivity, cooperation in third countries, and providing professional and legal services.

On the last point, he said that Singapore is a neutral third-party venue with legal centres that allow BRI countries and companies to resolve commercial disputes efficiently. The country also has the shortest resolution time worldwide for standardised commercial disputes, he said.

"We hope we will be able to provide some of the soft infrastructure to help pull some of the BRI projects together," he said. 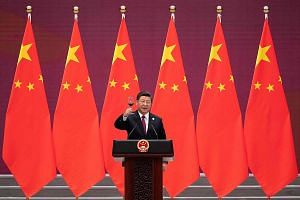 Belt and Road will be clean, green and sustainable: Xi Jinping

Greening Belt and Road projects will be a 'major undertaking for human development': Masagos

Singapore was also cooperating with China on the Chongqing Connectivity Initiative which, among other things, aims to link up the overland and maritime trunks of the BRI.

It has so far reduced by two-thirds the time required for goods from western China to reach Southeast Asia, improved flow of trade and finances, and smoothed out customs procedures.

He also said the initiative was one of the tangible outcomes from the BRI.

Now, six years after the BRI was mooted, it is timely to "review progress and to discuss perspectives on the way forward", said PM Lee.

Yesterday, he met his Vietnamese counterpart Nguyen Xuan Phuc, who is also in Beijing to attend the forum.

Both prime ministers expressed satisfaction with the expanding cooperation between their countries, and agreed to enhance such efforts in areas including trade and investment, science and technology, and financial services, said the Prime Minister's Office in a statement.

The leaders also encouraged companies to explore opportunities in their countries.

In the evening, Mr and Mrs Lee, along with other foreign leaders and their spouses, were also hosted to a welcome banquet by Mr Xi and his wife Peng Liyuan.

PM Lee is also expected to speak at a Leaders' Roundtable today that will be chaired by Mr Xi.

A version of this article appeared in the print edition of The Straits Times on April 27, 2019, with the headline 'Belt and Road can be key in boosting countries' ties: PM'. Subscribe
Topics:
More
Whatsapp Linkedin FB Messenger Telegram Reddit WeChat Pinterest Print Purchase Article Copy permalink