BEIJING - China has warned the United States against proceeding with the extradition of Huawei's chief financial officer Meng Wanzhou, threatening action if it does.

China's Foreign Ministry spokesman Hua Chunying issued the warning at a regular press briefing on Tuesday (Jan 22) after news broke that Washington intended to file an extradition request for Ms Meng, who is currently under house arrest in Canada.

"China will of course take action in response to measures taken by the US," Ms Hua told reporters.

"Everyone has to be responsible for their actions, and I think the same is true for a country. We hope that both Canada and the United States will recognise the serious nature of this incident and take steps to correct their mistakes."

Ms Hua said both the US and Canada have abused the bilateral extradition treaty between them and called on Washington to "immediately rectify its mistake" and not issue a formal extradition request to Ottawa.

Beijing's latest salvo worsens the already strained ties between China and Canada, which arrested Ms Meng last month at Vancouver airport following a request from the US.

In what was seen as retaliation, China later detained two Canadians - former diplomat Michael Kovrig and businessman Michael Spavor - on the grounds that they violated the country's national security. Shortly afterwards, another Canadian was sentenced to death on drug charges after an appeal by prosecutors. 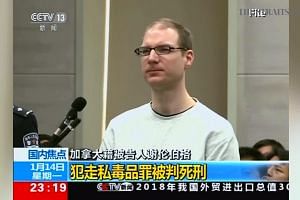 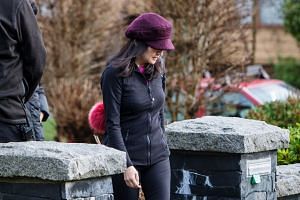 The US wants to extradite Ms Meng so she can face charges for violating US sanctions against Iran.

On Tuesday, Canada's Globe and Mail reported that Washington had informed Ottawa of its intention to proceed with a formal extradition request, which it has to file by Jan 30.

The report said Canada's Ambassador to the US David MacNaughton met several times with senior White House and US State Department officials about Ms Meng's case, during which he expressed Ottawa's anger and resentment with it.

"We do not like that it is our citizens who are being punished," Mr MacNaughton said. "(The Americans) are the ones seeking to have the full force of American law brought against (Ms Meng) and yet we are the ones who are paying the price. Our citizens are."

On Monday, over 140 former diplomats and scholars from various countries issued an open letter to Chinese President Xi Jinping calling for the release of Mr Kovrig and Mr Spavor.

In their letter, the signatories wrote that Mr Kovrig, was the Northeast Asia expert for the International Crisis Group, an NGO whose mission was to "build a more peaceful world". Mr Spavor, they said, has worked to build links between North Korea, China, the US and Canada.

"However, Kovrig and Spavor's detentions send a message that this kind of constructive work is unwelcome and even risky in China," said the letter.

Ms Hua responded by saying that by calling for the release of the two Canadians, the letter showed "disrespect" for Chinese law, and was not representative of the opinions of the international community.

Addressing the signatories, she said: "Do they hope for China's 1.4 billion people to also sign an open letter to Canada's leader? I believe the righteous voice of the Chinese people will definitely be louder than the voice of these 100 people."