BEIJING • China will work to tackle trade friction with the United States this year, China's Commerce Minister Zhong Shan said in an interview with state media that followed three days of talks between the nations and perked up troubled financial markets.

The Ministry of Commerce, which has set trade negotiations as one of its priorities this year, will push talks forward and boost cooperation with US states, cities, business communities and non-governmental groups in order to promote a stable bilateral trade relationship, state news agency Xinhua reported, citing an interview Mr Zhong granted to it and a number of other Chinese agencies.

Talks between mid-level US and Chinese officials in Beijing concluded last Wednesday.

The negotiations were extended for a day, which added to optimism fuelled by recent tweets from US President Donald Trump that the two sides are making progress towards an agreement.

US and Chinese stocks have advanced in the early days of this year on fresh hope for a breakthrough in the showdown between the world's two largest economies.

There are about seven weeks before the US-imposed deadline for a deal, after which Mr Trump may order a resumption of tariff hikes on imports from China.

The US President is increasingly eager to strike a deal with China in an effort to perk up financial markets that have slumped on concerns over the trade war, according to people familiar with internal White House deliberations. 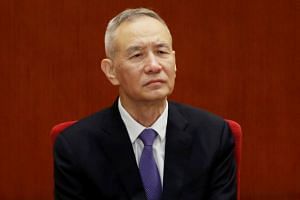 Other priorities for the ministry this year include expanding market access for foreign capital.

Such work includes shortening the so-called negative list nationwide, including for free-trade pilot zones, and provides for allowing foreign investors to set up 100 per cent-owned companies in more industries.

It also entails efforts to open up service sectors more, he said.

The ministry will also focus on hosting the second international import expo and promote the construction of more free-trade pilot zones as well as experimenting with free-trade ports, Mr Zhong said.

A version of this article appeared in the print edition of The Straits Times on January 14, 2019, with the headline 'Beijing to tackle trade row with US this year: Minister'. Subscribe
Topics:
More
Whatsapp Linkedin FB Messenger Telegram Reddit WeChat Pinterest Print Purchase Article Copy permalink