This follows report that US urged allies to avoid Huawei equipment

The United States must stop its "unreasonable suppression" of Chinese firms such as Huawei, and provide a fair business environment for them to conduct normal business activities in its market, the Chinese Foreign Ministry has said.

"In the absence of any evidence, the use of state power to discredit and attack specific enterprises is neither fair nor moral," ministry spokesman Geng Shuang said at a regular press briefing yesterday.

Mr Geng was responding to a New York Times article that said Washington has, for the past year, been stealthily pressing its allies to steer clear of networking equipment made by tech giant Huawei as countries roll out their next-generation 5G network infrastructure, due to security concerns.

While each country is naturally entitled to protect its information security, this "cannot be used as a pretence to damage or strangle legitimate business activity", he said.

Noting the NYT report said there has been no evidence released so far that implicates Huawei in any espionage, Mr Geng said: "We urge the US to stop the unreasonable suppression of Chinese companies, including Huawei, and to provide a fair environment for Chinese and American companies to cooperate with each other."

While US President Donald Trump has taken a more confrontational approach with China than previous administrations, NYT said Huawei is in the US' cross hairs because of its dominant position in a new global technological arms race to provide the hardware that will power the Internet in the coming decades.

"The administration contends that... whichever country dominates 5G will gain an economic, intelligence and military edge for much of this century," NYT said.

We urge the US to stop the unreasonable suppression of Chinese companies, including Huawei, and to provide a fair environment for Chinese and American companies to cooperate with each other.

But the lack of evidence against Huawei has prompted some countries to question whether the US campaign is, in fact, aimed at stopping China from gaining a competitive edge, it added.

Industry experts said Huawei and China are likely to lead the world in 5G technology because of massive investments by both Chinese firms and the state.

Upcoming 5G networks can be up to 1,000 times faster than existing 4G networks, and experts said this will be transformative as it underpins other emerging technologies such as virtual reality and autonomous vehicles.

In a report last year titled "China is poised to win the 5G race", Ernst & Young (EY) noted that Beijing had, years ago, made 5G R&D part of the national agenda through a series of policies, with the aim of increasing its global influence as well as for economic gain. "EY expects China's 5G capital expenditure will amount to 1.5 trillion yuan (S$300 billion) between 2019 and 2025," it said.

Huawei has been the most prominent example of China's drive. 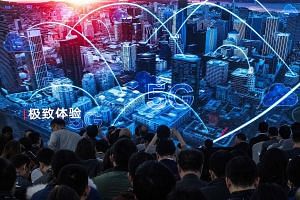 Research analyst Parv Sharma from Counterpoint Research estimated that Chinese firms today own 10 per cent of the world's core 5G-related patents, with Huawei's portfolio being the largest. Other major players are the US' Qualcomm, Sweden's Ericsson and Finland's Nokia.

"It (Huawei) is one of the few players which have control over the entire ICT (information and communications technology) value chain," he said. "With active R&D investment and intellectual property rights, it is becoming a technology giant."

US intelligence agencies have said implicitly that Huawei's growing tech dominance and Chinese laws that oblige its tech firms to submit to Beijing have fuelled concerns, and a growing number of Western countries have tightened access to their 5G networks.

The US intelligence community spotlighted emerging and disruptive technology, including 5G, in its worldwide threat assessment report last year. Intelligence officials will appear before the US Senate today to deliver this year's assessment.

China has repeatedly rejected the US' allegations as unfounded.