HONG KONG (AFP/BLOOMBERG) - A senior Beijing official on Sunday (Feb 14) blamed "radical separatists" for a riot that erupted in Hong Kong last week, the worst clashes the city has seen since mass pro-democracy protests, as the city's leader said most of the protesters were jobless.

"After the riot in Mong Kok, we are feeling very much shocked and saddened," Mr Zhang told reporters.

"We strongly condemn those radical separatists who have become increasingly violent, even (carrying out) activities that showed terror tendencies," the director of China's Liaison Office in Hong Kong said in Chinese.

Mr Zhang added he believed "justice will prevail over evil" and that the Hong Kong government would handle the situation in accordance with the law.

Asked on Sunday whether the Mong Kok incident would be used to revive so-called Article 23 anti-sedition laws - shelved after massive protests against their implementation in 2003 - Mr Zhang said, "right now these two issues aren't linked", according to a broadcast of his comments on the local Cable News channel.

Hong Kong leader Leung Chun Ying said on Sunday most of the protesters were unemployed and did not reflect mainstream views. 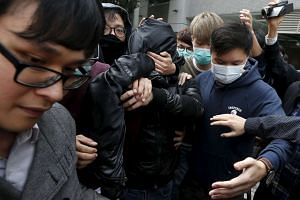 The perpetrators of violent clashes in Hong Kong this week shattered its values in one night, the city's financial secretary said, urging those involved to "turn their horses back from the cliff".

The "small group of people who lost rationality" marred the city's interests and tarnished its image, and their actions are a departure from Hong Kong people's respect for the law, Mr John Tsang said in a blog post on Sunday.

He referred to the biblical story "The Judgment of Solomon", where two women who claim to be the mother of a baby were advised to cut the infant in two.

"A mother who truly loves her son would not saw him in half, and would never themselves be the executioner," Mr Tsang wrote.

Addressing those involved in the clashes, he said, "if you continue wading deeper into the mud, it's the Hong Kong you claim to protect that will lose in the end".

Mr Tsang noted in his post that tourism is an anchor of Hong Kong's economy. The number of tourists from the mainland declined 2.5 per cent last year, he said, citing tourism department data, but the number of visitors from South-east Asia has grown.

He said the city must continue to improve itself. "Feeling a sense of love for Hong Kong is normal," Mr Tsang said. Even if people have different perceptions of what allegiance to Hong Kong means, "we still hope to see Hong Kong thrive and won't accept it being damaged".

Mr Benny Tai, a leader of the Occupy Central With Love and Peace movement, said in an open letter on Saturday that Mr Leung Chun Ying bears the most responsibility for the events.

While denouncing the violence and saying peaceful protest is the way to achieve political goals, Mr Tai said Mr Leung was accountable for discontent among the people he governs.

Chinese Foreign Minister Hong Lei attributed the events to a "local radical separatist organization", according to a Feb 11 statement from the Foreign Ministry. The stronger language sparked speculation that security laws could be strengthened.

Coverage of the fallout has dominated newspapers during the Chinese New Year period.

Police fired warning shots in the air, while demonstrators hurled bricks levered up from pavements, charged police lines with homemade shields and set rubbish on fire.

About 100 people were injured, including police officers, journalists and protesters, and 65 were arrested in the disorder, rare in Hong Kong.

Some 30 of them have been charged with rioting.

The battles have been dubbed the "fishball revolution" after a favourite Hong Kong street snack and reflect underlying tensions over the erosion of the city's traditions.

Demonstrators included "localist" activists who want to restrict Beijing's influence on the city.

Mongkok, on the city's Kowloon peninsula, was the scene of some of the worst violence during the 79-day "Occupy" pro-democracy street protests in late 2014.

The mass rallies seeking fully free leadership elections in the city blocked some major streets for more than two months.

Hong Kong was returned by Britain to China in 1997 with its way of life protected for 50 years by a joint agreement.

But there are fears that freedoms enshrined in the agreement are being eroded by Chinese influence, including the recent case of five Hong Kong publishers known for titles critical of Beijing, four of whom it is confirmed have been detained on the mainland.