XI'AN (XINHUA) - A woman who successfully received a womb donated by her mother after a uterus transplant in November 2015 gave birth to a healthy baby boy in north-west China's Shaanxi Province on Sunday (Jan 20).

Weighing 2kg and measuring 48cm long, the baby is considered to be China's first and the world's 14th baby who was born from a transplanted womb, said doctors with the Xijing Hospital in Xi'an, where the baby was born and the previous uterus transplant was performed.

Twenty-six-year-old Yang Hua, the new mother, was born without a uterus but has her own ovaries which produce eggs.

In 2000, the world's first human womb transplant took place on a 26-year-old woman in Saudi Arabia. The transplanted uterus failed after three months and had to be removed. 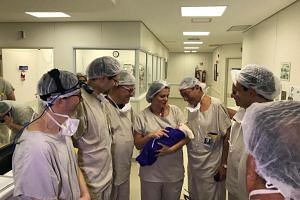 Woman becomes first in US to give birth after uterus transplant

The uterus, with plenty of tenuous blood vessels, grows in the depths of a woman's pelvic cavity. Therefore, a string of problems including cutting, the structure of the blood vessels during the transplant and strong rejection reactions may occur, said Dr Chen.

There are about one million women in China who are suffering from uterine infertility.

Due to the limitation of the current assisted reproductive technology and the prohibition of surrogacy in many countries, uterus transplants have provided an effective way for women plagued by uterine infertility to have their own babies, according to Dr Chen.