In an unusual move, Kim met the delegation on the first day of the visit, and later hosted a welcome dinner.

The dinner event, which lasted over four hours, was also attended by Ri and Kim's younger sister Kim Yo Jong.

"(Ri's appearance) is showing the highest courtesy, in response to South Korea President Moon Jae In and first lady Kim Jung Sook having received Kim Yo Jong," said Yang Moo Jin, a professor at the University of North Korean Studies.

"It remains to be seen whether it is a ploy to (appear as a) conventional country. Regardless, it is an extraordinary and proactive gesture," he said.

Although Ri has appeared in North Korean media at domestic events, she has rarely been seen attending diplomatic events. 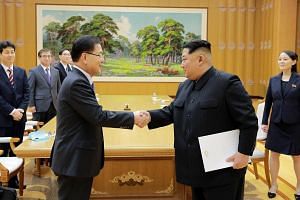 South Korea envoys head to Pyongyang to push talks with US

Kim Jong Un has met with foreign officials on seven occasions since taking power, but Ri has only appeared on one other occasion apart from Monday's dinner with Seoul's envoys.

The first time North Korean media showed Ri at a diplomatic event was a welcome performance staged for Miguel Diaz-Canel, first vice president of Cuba's the Council of State, in 2015.

Monday's appearance by Ri has been interpreted by some as North Korea's attempt at maintaining the appearance of being a "normal" state.

The change in the way North Korean media referred to Ri is thought to be part of the strategy.

North Korean media referred to Ri by the title "lady" for the first time last month, in an apparent attempt to cast her in the same light as the wives of other male heads of state.

Until last month, Ri was referred to as "comrade" by the North's state media outlets.