From strategic rivalry and safety at sea to mitigating nuclear and terror threats, we look at key issues participants at the Shangri-La Dialogue will discuss. Why do these issues matter, and what can we expect to hear?

As China rises, its rivalry with the world's No.1 power, the United States, has intensified, particularly in East Asia where Asian power is challenging US primacy.

This increased competition has caused countries in the region to be worried about possible conflict between the two great powers and about being forced to choose sides.

The US has been dominant militarily in the region since the end of World War II. This dominance, together with the US-led international order that provides the rules for trade, investment and security, has afforded the peace and stability that allowed many of the region's countries to develop and prosper.

However, China, since starting its reforms and opening up in 1978, has been reaching out to East and South-east Asia economically. This outreach intensified in the 1990s after the Tiananmen Square incident in 1989 led to sanctions against it by the US and other Western countries.

China's economic transformation during this time benefited the region's economies greatly as its manufacturing sector was heavily dependent on imports from them to feed its factories churning out goods destined for the West. Many ran trade surpluses with China.

As trade burgeoned, China and economies of the region began to build institutions, including free trade agreements, to support their trading relationships, pulling them closer together. 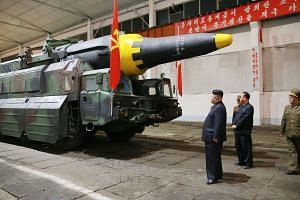 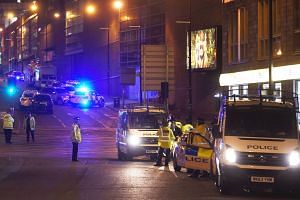 From Manchester to Mindanao, ISIS a global menace 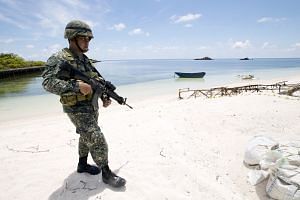 Also, in 2002, after sporadic confrontations in the South China Sea over competing territorial claims, Beijing signed a non-binding Declaration on the Conduct of Parties with Asean to keep conflict at bay and pave the way for a binding code of conduct. China has overlapping territorial claims with four Asean states as well as Taiwan.

As China prospered, it also began to modernise its military, with a growing focus on its navy, with a view to protecting its growing interests beyond its shores.

Diplomatically, China pursued initiatives such as settling its border dispute with Russia in 2005. It hosted the six-party talks from 2003 to try and resolve the North Korean nuclear issue and started the Shanghai Cooperation Organisation together with Russia and four Central Asian countries to fight terrorism, but also to build relations with these resource-rich nations.

All these activities got the Americans worried about Chinese intentions in the region.

Mr Jeffrey Bader, a senior fellow at the US think-tank Brookings Institution, wrote in 2005: "These extraordinary advances in China's relations with its neighbours in Asia have raised questions among Americans about China's attitude towards the US.

"Some have posited that China seeks a kind of Monroe Doctrine for Asia, to radically diminish US influence in the region." The Monroe Doctrine is an American foreign policy statement dating back to 1823.

Also in 2005, at the June Shangri-La Dialogue, then US Defence Secretary Donald Rumsfeld questioned the increase in China's military spending and warned that its improved ballistic missile units would allow it to "reach targets in many areas of the world".

"Since no nation threatens China, one wonders: Why this growing investment? Why these continuing large and expanding arms purchases?" he asked.

On the sidelines of the same security forum the following year, Mr Richard Armitage, former aide to President George W. Bush, noted the importance of China's rise. "It has redirected our attention here. And there are many in the US who want to re-energise our relationship with South-east Asia," he added.

But the Bush administration was preoccupied with the wars in Iraq and Afghanistan.

It was left to Mr Bush's successor Barack Obama to pivot to Asia in 2011, amid escalating tensions over territorial disputes between China and Japan in the East China Sea and between China and the Asean states in the South China Sea.

The US began strengthening its security alliances and partnerships in the region, including with Japan, South Korea and Australia.

This was as China, with its growing economic strength, began to flex its muscle, including putting out a map that lays claim to nearly all of the South China Sea in 2009; declaring an air defence identification zone in the East China Sea in 2013; and building artificial islands on reefs it occupied in the South China Sea, and deploying military facilities on them. Through it all, it continued the modernisation and build-up of its military forces.

This new assertiveness is partly in response to former president Obama's pivot to Asia, which it sees as strategic containment of China and its periphery.

By the end of the Obama administration early this year, the US-China relationship had become deeply strained and "filled with mutual mistrust, suspicions, acrimony, disillusionment and real policy differences", said China expert David Shambaugh of the George Washington University at a forum in Singapore last week.

By the end of the Obama administration early this year, the US-China relationship had become deeply strained and "filled with mutual mistrust, suspicions, acrimony, disillusionment and real policy differences", said China expert David Shambaugh of the George Washington University at a forum in Singapore last week.

Other analysts have questioned whether the two sides would go to war, citing the Thucydides trap, in which the position of a dominant state is challenged by a rising one, often leading to violent conflict.

However, things have turned around after US President Donald Trump took office in January, particularly after his summit with Chinese President Xi Jinping in April. The two sides agreed to cooperate on North Korea and to continue with their comprehensive dialogue. They recently agreed on a 10-point trade deal.

For the next few months at least, the Sino-US rivalry is unlikely to worsen, said Professor Shi Yinhong of Renmin University at the same forum last week.

Still, the subject is likely to come up at this year's Shangri-La Dialogue, whether directly or indirectly, just as it had over the years in varying degrees of intensity, depending on how good or bad relations were.

A version of this article appeared in the print edition of The Sunday Times on May 28, 2017, with the headline 'Asia's worry: Having to take sides'. Subscribe
Topics:
More
Whatsapp Linkedin FB Messenger Telegram Reddit WeChat Pinterest Print Purchase Article Copy permalink