BEIJING - South-western Guangxi's Liuzhou city was rocked by another blast on Thursday morning (Oct 1), which caused bricks to rain onto the streets below a residential area.

Chinese media reports quoted residents saying the 8am explosion was loud and that they could feel the tremors from their beds. Police and firemen have arrived at the six-storey building, with no one reported injured so far.

The latest blast came after local police revealed on Wednesday night that they had found more than 60 suspicious packages after being tipped off by residents. Explosives experts were being readied to investigate and deactivate the parcels. 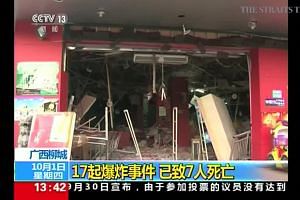 Official postal services in Liuzhou have stepped up their safety checks and will suspend services up till Saturday (Oct 3). Authorities have advised locals not to open parcels they receive in the coming days and to avoid suspicious packages placed in public.

"The public must be on guard. Do not accept or pass items on for strangers. Do not accept parcels that arrive from unusual channels," the Liuzhou police were quoted saying on their social media Weibo account.

This morning's blast also comes after at least seven people were killed and 51 others injured in Liuzhou yesterday (Wed), as 17 package bombs went off in hospitals, shopping malls and government offices, among other places. 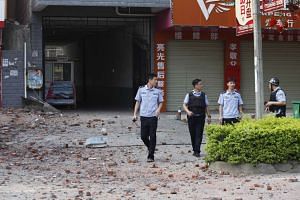 Chinese media reports say police have arrested a local 33-year-old male surnamed Wei for the "criminal" act. They have ruled out terrorism but did not say what motives Wei had for carrying out the blasts.

The explosions in Liuzhou occurred as China started its week-long National Day holidays, and comes after a string of violent knife and bomb attacks in China in recent years by people wanting to bring attention to their grievances.