TOKYO (AFP) - Japan's century-old imperial proclamation urging people to be willing to die for the emperor was consigned to history books until video surfaced showing children in an Osaka kindergarten enthusiastically reciting it.

A Cabinet decision allowing schools to teach the long-banished edict, which was used to promote militarism in the 1930s and 1940s, has delighted hardcore nationalists but left many Japanese scratching their heads.

Others were horrified at the sight of youngsters chanting the archaic proclamation, even as Prime Minister Shinzo Abe's wife, Akie, praised them during a visit to the school, run by a nationalist seeking to inculcate pupils with pre-war values.

The once-revered Imperial Rescript on Education, issued in 1890, was abolished after Japan's World War II defeat at the hands of the US over concerns it had contributed to creating a militaristic culture.

It exhorted citizens to "offer yourselves courageously to the State" so as to "guard and maintain the prosperity of Our Imperial Throne". 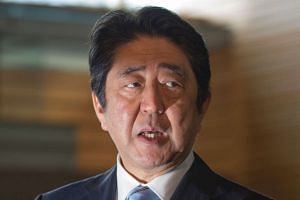 The edict "functioned as a mechanism to strike down people's individual rights," said Kenji Ishikawa, a law professor at Tokyo University.

But Abe and his fellow conservatives have sought to stealthily bring it back into vogue, as part of a bid to revive traditional values that have lost their shine following the introduction of an American-penned pacifist constitution which renounces war and designates the emperor as a figurehead.

"Japan should not just be an economic power but a country respected and relied on in the world for its high ethical views and morality," hawkish defence minister Tomomi Inada said last week.

Some constitutional scholars have expressed concern over the government's attempt to expose impressionable minds to a document with "fanatic and cult-like" leanings.

Sota Kimura, a law professor at Tokyo Metropolitan University, said the revival appeared to be a sop to nationalists who "feel terribly humiliated about the post-war system imposed by the Allies".

Members of Abe's Cabinet, including Inada, have regularly sought to appease the government's conservative base with nationalist gestures, such as paying homage at the controversial Yasukuni Shrine where senior convicted war criminals are honoured.

The edict was once considered so sacred that school principals who accidentally disrespected the document would commit suicide out of shame or fear of punishment, according to some accounts.

A copy of it was kept in a special cabinet in schools where children were forced to bow before it.

But the clumsily managed revival has left many Japanese confused over the 19th-century edict's relevance to their hectic 21st-century lives.

Its archaic wording means most Japanese today have neither read it nor know how to interpret it.

"I'm not really clear what it is," said Yoshiko Yamanaka, a 48-year-old mother of two, when asked about the document.

"It's got something to do with having to serve the state for the emperor, or something, right?"

Others who are more familiar with its content say it has no place in a modern society where all citizens are deemed equal.

"It's nonsense to bring it back now," said Kazushi Tamura, 54.

"Some people say it contains some good moral values like respecting family, friends and parents... But all of them end up telling people to serve the emperor." Abe's government has tried to play down the issue, saying it is not mandatory for schools to teach the edict and that any lessons involving it must not "go against the constitution".

But even conservative media who usually support Abe's agenda have drawn a line.

"It is clear that a national view centred around the emperor cannot be viable under the current constitution," the top-selling Yomiuri Shimbun daily said in an editorial.

Although this has done little to dampen the fervour expressed by ultra-nationalists, the reception suggests they are out of step with much of Japanese society as well as the country's widely admired emperor.

Emperor Akihito, 83, is the first Japanese monarch to assume the Chrysanthemum Throne without enjoying the semi-divine status accorded to his forefathers and he has embraced his symbolic role.

He is also credited with seeking reconciliation both at home and abroad over the legacy of the war fought in his father's name, venturing to locales that saw intense fighting and offering prayers for the souls of all the dead.