China will pump another US$50 million (S$72 million) into the Asian Infrastructure Investment Bank (AIIB), President Xi Jinping announced yesterday, as the new multilateral bank widely seen as Beijing's challenge to the global financial order officially got off the ground.

The bank will boost investment for infrastructure in Asia and improve connectivity and integration, Mr Xi said yesterday at the bank's lavish opening ceremony in Beijing.

"This is a historical moment," Mr Xi said in his opening speech to hundreds of invited guests, including Singapore's Finance Minister Heng Swee Keat who is the city-state's governor at the AIIB.

"It will bring a better investment environment and more job opportunities and trigger greater medium- to long-term development potential on the part of developing members in Asia. This in turn will give impetus to economic growth in Asia and the wider world."

Amid growing fears of a sharp slowdown in the world's No.2 economy, Premier Li Keqiang, also speaking at the ceremony, said China's economy grew by around 7 per cent last year, with the services sector accounting for half of gross domestic product. 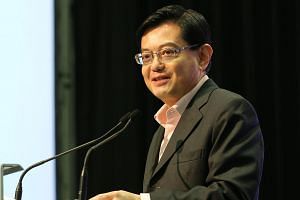 He added that employment had expanded more than expected and that consumption contributed nearly 60 per cent of economic growth.

The Beijing-based bank, seen as a rival to the Japan-led Asian Development Bank (ADB) and the United States-led World Bank, has become one of China's biggest diplomatic coups.

Despite the opposition from Washington, 57 countries - including Singapore and major US allies such as Australia, Britain and South Korea - have joined, although Japan has notably declined.

China will contribute the US$50 million to a special preparatory fund to be established soon for infrastructure projects in less developed member states, he said at the opening ceremony.

Already, China has an initial subscription of US$29.78 billion in authorised capital stock in the AIIB, out of a total of US$100 billion.

Yesterday, Chinese Finance Minister Lou Jiwei, who is also chairman of the AIIB council, said the bank will work together with other multilateral banks, including the World Bank and the ADB, to facilitate Asian infrastructure construction and sustainable development.

Experts say that while the AIIB's management has hit all the right notes with its pledge to be transparent, efficient and environmentally friendly, the real test lies ahead.

Dr Robert Wihtol, a former ADB country director for China, told The Sunday Times the real challenge will be for the bank to walk the talk.

"Attracting experienced staff will be crucial. The AIIB must show that it can prepare infrastructure projects to a high standard and implement them in the challenging operational environment that exists in many Asian countries," he said.

Dr Wihtol also said that China's contribution to the new preparatory fund, which is similar to those in other multilateral banks, was a positive sign. "It indicates that China and the AIIB understand the magnitude of the challenges ahead, especially in Asia's poorer countries."

A version of this article appeared in the print edition of The Sunday Times on January 17, 2016, with the headline 'AIIB kicks off with $72m boost from China'. Subscribe
Topics:
More
Whatsapp Linkedin FB Messenger Telegram Reddit WeChat Pinterest Print Purchase Article Copy permalink