China leads the pack in the number of dinosaur findings, overtaking the US

China, which has become a treasure trove of dinosaur fossil findings, can claim global supremacy in the area of dinosaur discoveries.

This is thanks to the widespread construction work that has exposed rocks, and also greater government resources to fund expeditions over the past two decades.

China is now dubbed the world's "Dinosaur Power" and a destination for international palaeontologists, some of whom have taken to calling it the "Age of the Chinasaurs".

Figures provided by University of Pennsylvania dinosaur palaeontology professor Peter Dodson in 2010 showed China's rapid ascension in the number of dinosaur types discovered. In 1990, 64 types were found in the United States; 44 in Mongolia; 36 in China. In 2006, China leapt to second spot with 101, trailing behind the US' 108 and ahead of Mongolia's 61.

In recent years, China has peeled further away from the chasing pack with several key dinosaur findings. 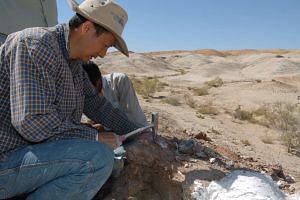 Love of paleontology an accidental discovery for China’s No. 1 dino hunter 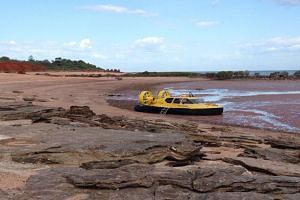 The latest announced last month was a 2m-long, winged dinosaur believed to be an ancestor of the velociraptor. It is named Zhenyuanlong, after a farmer who discovered the 125 million-year-old fossil in the north-eastern Liaoning province.

Prof Dodson told The Straits Times that while he does not have current figures, he feels "pretty certain that the gap between China and the US continues to widen".

Palaeontology professor Philip Currie of the University of Alberta in Canada agreed and added: "And with the increased interest comes increased awareness. This in turn results in even more discoveries," he told The Straits Times.

It is not just the quantity, but also the quality of Chinasaurs that has excited the world of dinosaur research, said experts.

"Unquestionably, the most important discovery that has forced a re-evaluation of all dinosaurs everywhere is the discovery of feathers and proto-feathers so widely distributed on raptors (small meat-eating dinosaurs)," said Prof Dodson.

Dinosaur discoveries in China began from as early as the 1900s. The pace quickened after it found the first feathered dinosaurs in 1996, named Sinosauropteryx, in Liaoning's Chaoyang city.

To date, China has excavated and named over 170 dinosaur species, about one sixth of the world's total.

Researchers such as Dr Lv Junchang from the Chinese Academy of Geological Sciences told The Straits Times they have received more funding in their work. A law passed since 2002 making it compulsory for discovery of dinosaur remains to be reported to the authorities has also been crucial in their research.

Local governments with an eye on commercial opportunities from dinosaur discoveries have also been supportive. "Dinosaur cities" such as Heyuan in southern Guangdong province have set up dinosaur theme parks and museums to attract the tourist dollar.

Heyuan holds the world record for the largest number of dinosaur eggs discovered there. Nearly 17,000 dinosaur eggs have been found in Heyuan since 1996, Xinhua news agency reported.

The fervour of the local governments is fuelled by a belief that dinosaur discoveries would attract investments from firms that deem places once roamed by dinosaurs to be auspicious, a local official said.

Professor Xu Xing, widely recognised as China's No 1 dinosaur hunter and its equivalent of America's famed palaeontologist Jack Horner, told The Straits Times that rampant illegal excavations - despite being a key factor why the number of China's dinosaur discoveries has soared - posed a major problem.

"Economic gains have encouraged many amateurs to conduct private excavations, damaging fossils and causing the loss of important research data," said Prof Xu of the Institute of Vertebrate Palaeontology and Paleoanthropology at the Chinese Academy of Sciences.

Experts add that fossil forgery is a problem, estimating that up to 80 per cent of fossils displayed in Chinese museums are fake.

China also faces a looming dearth of palaeontologists. A 2010 report found that Peking University's palaeontology department had only one graduate each year since it began in 2008. This is because unlike in the past when schools assign students to majors, students these days can choose their specialisation, with many shunning natural sciences deemed to be too esoteric.

Local officials who value money-making opportunities over science also hamper research. The tourism head of Shandong's Zhucheng - another "dinosaur city" - was once quoted as saying in 2008 that the authorities might stop further excavations so that tourists could see the dinosaur bones in the state that they were found and not in a museum.

Prof Xu said such a mindset shows that local officials still need to be educated on the long-term benefits of dinosaur fossil research, even though he understands the need to boost government revenue.

The first dinosaur bearing primitive wings was found in Chaoyang city, in north-eastern Liaoning province, in 1996. Since then, several other new species of these primitive bird-like dinosaurs have been discovered there. This small carnivorous dinosaur, which is about 1.3m long, existed in the Early Cretaceous Period. This specific discovery is of the utmost significance in dinosaur studies.

The 15m-long "dragon" dinosaur species was named after Qijiang city in south-western Chongqing, where it was found. The plant-eating dinosaur, with a neck that is half the length of its body, is believed to have roamed the earth 160 million years ago. It is classified as a mamenchisaurid, a group of dinosaurs known for their long necks and found only in Asia.

China's largest Sauropod dinosaur was unearthed in Mamenxi, Hechuan district, south-western Chongqing municipality, in 1957. The giant dinosaur is between 16m and 30m long, with its neck accounting for half of its full body length. This herbivore walked the earth during the Late Jurassic Period, weighing in at about 20 to 30 tonnes. Studied and named by China's famed palaeontologist C. C. Young, the Mamenchisaurus is the longest dinosaur discovered in Asia.

The four-winged dinosaur - likely the largest reptile of its kind - was discovered in July last year, based on 125-million-year-old fossils found in Liaoning province.

It has a long tail with feathers 30cm in length, which is the longest seen on a dinosaur fossil and is believed to have played a major role in flight control, like a plane's rudder.

A version of this article appeared in the print edition of The Straits Times on August 03, 2015, with the headline 'Age of the Chinasaurs'. Subscribe
Topics:
More
Whatsapp Linkedin FB Messenger Telegram Reddit WeChat Pinterest Print Purchase Article Copy permalink