If he remains in office through November next year, he will become Japan's longest-serving prime minister

If Mr Abe, who quit abruptly after a troubled 2006-2007 term, stays in office through November next year, he will have exceeded the 2,886 days marked by Prince Taro Katsura in the early 20th century.

"I want to tackle constitutional reform together with all of you," Mr Abe told his Liberal Democratic Party (LDP) after the vote.

Mr Abe, who surged back to power in 2012 promising to reboot the economy and strengthen defence, defeated former defence minister Shigeru Ishiba in the LDP leadership election.

Mr Abe won 553 votes to Mr Ishiba's 254, a somewhat stronger showing than expected. Of the 810 votes up for grabs from LDP parliamentarians and rank-and-file members, 807 were valid.

He told a news conference he would reshuffle his Cabinet after coming back from a trip to New York for a United Nations General Assembly gathering next week. 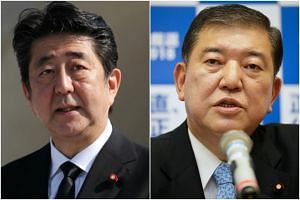 Shinzo Abe, Shigeru Ishiba in the running for vote to decide Japan's Prime Minister until 2021

Mr Abe also said he would compile an extra Budget for relief from the natural disasters - floods and earthquakes - that have battered Japan in recent months.

Mr Abe has pledged to reform social security, making it easier for people to stay in the workforce and offset Japan's shrinking population by raising the retirement age to above 65 and letting them defer pension payouts beyond age 70.

Mr Abe's first immediate challenge, though, is an expected summit with US President Donald Trump next week, when he will face pressure to cut Japan's US$69 billion (S$94 billion) surplus with its key ally, nearly two-thirds from car exports.

The two leaders are expected to meet on the sidelines of the UN event. Although they have forged close ties, Mr Trump has made it clear he is unhappy about the bilateral trade imbalance and wants a two-way agreement to address it. Tokyo opposes a bilateral deal for fear it would boost pressure on sensitive sectors like agriculture.

The Trump administration is also exploring raising tariffs on Japanese car exports, a step Tokyo officials say would do serious damage to the two economies and world trade.

Mr Abe, whose policymakers must keep growth on track with a dwindling policy toolkit, said the central bank's efforts to achieve its 2 per cent inflation target, coupled with government steps to beat deflation, had succeeded in creating more jobs.

"The biggest goal of our macroeconomic policy has been fulfilled as a result of measures taken by the government and the Bank of Japan (BOJ) to achieve 2 per cent inflation," Mr Abe said, signalling he was no longer insisting on hitting the elusive inflation target.

He added that he would strive to pave the way to end deflation during his new three-year term.

Mr Abe has pledged to reform social security, making it easier for people to stay in the workforce and offset Japan's shrinking population by raising the retirement age to above 65 and letting them defer pension payouts beyond age 70.

He has said he will implement a planned rise in the sales tax to 10 per cent from 8 per cent in October next year but that could hit the economy just as Mr Trump's protectionist policies could hurt Japanese exports.

Revising the Constitution's Article 9 to clarify the military's ambiguous status is one of Mr Abe's long-held goals. The Article, if taken literally, bans maintenance of armed forces but has been interpreted to allow a military for self-defence.

The amendment would be a largely symbolic change, but pushing for it would be politically risky since the public is divided.