TOKYO (BLOOMBERG) - Japanese Prime Minister Shinzo Abe, already on course to become his country's longest-serving premier, played down speculation that he would seek to extend his stay as ruling party leader, saying he is focused on his current term.

Abe told a parliamentary session Thursday (March 14) it is a matter of course to follow ruling Liberal Democratic Party rules that prohibit serving a fourth-consecutive term as leader.

But with no successors emerging and steady support for his government, some in the LDP camp have indicated Abe should stay on beyond his current term that ends in 2021.

LDP Secretary General Toshihiro Nikai told reporters this week it was "absolutely possible" that party members would pick Abe again. The LDP had previously changed its rules to allow Abe to seek a third-consecutive term.

"I am already on my third term and under LDP rules a fourth term is prohibited," Abe said in response to questions from a lawmaker. "I want to focus on putting all my energy into producing results in what will be my final term."

If Abe serves until Nov 20, he will become Japan's longest-serving premier, overtaking Taro Katsura, who held the post more than a century ago. The LDP has governed Japan for most of its postwar history, so its leadership elections often effectively select the prime minister.

The Sankei newspaper has referred to the struggle to find a successor as a "height contest among acorns," because other party figures have largely failed to make an impact.

Abe has been seen as a steady hand guiding the world's third-largest economy and ultra-loose monetary policy under his government has helped Japan achieve its strongest period of growth since the 1990s. 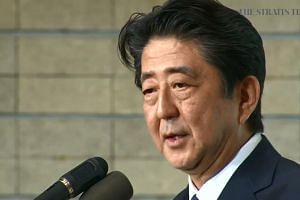 Shinzo Abe, Shigeru Ishiba in the running for vote to decide Japan's Prime Minister until 2021

Thanks to the economy and a disorganised opposition, the party has survived a series of scandals and won two general elections since returning to power under Abe in 2012. The LDP, however, faces a potential loss of seats in an election to the less powerful upper house in July.

Abe, a conservative, has pledged to amend Japan's pacifist Constitution, which has remained unchanged since its introduction under the US occupation after World War II.

His government has also been at loggerheads with neighbour South Korea in disputes stemming from Japan's 1910-1945 colonial rule over the Korean Peninsula.

An October poll by Jiji News found the most popular candidate to serve as the next prime minister was Shinjiro Koizumi, the 37-year-old son of a former premier, on 26.1 per cent.

Second was Abe on 16.7 per cent and third was Shigeru Ishiba, a 62-year-old former defence minister, who was the only candidate to run against Abe in last September's election. He scored 15.3 per cent.

Other potential candidates are former Foreign Minister Fumio Kishida, 61, who has been cited by Abe as a possible leader, and former Finance Ministry official turned LDP executive Katsunobu Kato, 63, who has also been reported as saying Abe could serve another term.

Public support for Abe's Cabinet has hovered at around 40 per cent for more than a year, according to polling by public broadcaster NHK.

Almost half those who supported him in this month's poll stated as their reason that he was "better than the alternatives." "There is a great deal of support for his activities at the moment from those around him, from in and outside the party and especially from overseas," the LDP's Nikai told reporters Tuesday.

When asked about the potential for Abe to serve another term, he said "I think it is absolutely possible."

Nikai's remarks didn't sit well among those who have expressed interest in the top post. Kishida told a press conference he didn't understand Nikai's comments and that the rules clearly allow only three consecutive terms as leader, NHK reported.