HONG KONG (NYTIMES) - Eighteen-year-old Wei Dilong, who lives in the southern Chinese city of Liuzhou, likes basketball, hip-hop music and Hollywood superhero movies. He plans to study chemistry in Canada when he goes to college in 2020.

Mr Wei is typical of Chinese teenagers in another way, too: He has never heard of Google or Twitter. He once heard of Facebook, though. It is "maybe like Baidu?" he asked one recent afternoon, referring to China's dominant search engine.

A generation of Chinese is coming of age with an Internet that is distinctively different from the rest of the Web.

Over the past decade, China has blocked Google, Facebook, Twitter and Instagram, as well as thousands of other foreign websites, including The New York Times and Chinese Wikipedia. A plethora of Chinese websites emerged to serve the same functions - though they came with a heavy dose of censorship.

Now, the implications of growing up with this different Internet system are starting to play out.

Many young people in China have little idea of what Google, Twitter or Facebook are, creating a gulf with the rest of the world.

And, accustomed to the homegrown apps and online services, many appear uninterested in knowing what has been censored online, allowing Beijing to build an alternative value system that competes with Western liberal democracy.

These trends are set to spread. China is now exporting its model of a censored Internet to other countries, including Vietnam, Tanzania and Ethiopia.

Such outcomes are the opposite of what many in the West anticipated would be the effect of the Internet.

In a 2000 speech, then United States President Bill Clinton argued that the Internet's growth would make China a more open society like the US.

"In the new century, liberty will spread by cellphone and cable modem," he said.

For the US and other Western Internet giants, the hope of getting a piece of the huge China market is increasingly a pipe dream.

China's Communist Party has demonstrated clearly that it will walk down a path of tighter ideological control under President Xi Jinping. In the first half of this year, the Internet regulator Cyber Administration of China said it had shut down or revoked the licenses of more than 3,000 websites.

Yet, US Internet giants are still trying. Google has been working on a censored search engine for China's smartphone users in case the government lets it in. And last month, Facebook gained approval to open a subsidiary in the eastern province of Zhejiang - only to see the approval quickly withdrawn.

But even if the Western apps and sites make it into China, they may face apathy from young people.

Two economists from Peking University and Stanford University concluded this year, after an 18-month survey, that Chinese college students were indifferent about having access to uncensored, politically sensitive information.

They had given nearly 1,000 students at two Beijing universities free tools to bypass censorship, but found that nearly half the students did not use them. Among those who did, almost none spent time browsing foreign news websites that were blocked.

"Our findings suggest that censorship in China is effective not only because the regime makes it difficult to access sensitive information, but also because it fosters an environment in which citizens do not demand such information in the first place," the scholars wrote.

Ms Zhang Yeqiong, 23, a customer service representative at an e-commerce company in Xinji, a small city a few hours' drive from Beijing, echoed that sentiment. "I grew up with Baidu, so I'm used to it," she said.

The attitude is a departure even from those born in China in the 1980s. When that generation was coming of age a decade or so ago, some were rebels. One of the most famous was Han Han, a blogger who questioned the Chinese political system and traditional values. He sold millions of copies of books and has more than 40 million followers on Weibo, the Chinese equivalent of Twitter. 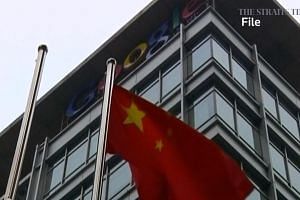 Now, there are no Chinese in their teens or 20s who are like Mr Han.

Even Mr Han, now 35, is no longer his former self. He mainly posts about his businesses on Weibo, which include making films and race cars.

Many young people in China instead consume apps and services like Baidu, the social media service WeChat and the short-video platform Tik Tok. Often, they spout consumerism and nationalism.

In March, when social media giant Tencent surveyed more than 10,000 users who were born in 2000 or after, nearly eight in 10 said they thought China was either in its best time in history or was becoming a better country each day.

Nearly the same percentage said they were very optimistic or quite optimistic about their future.

One who describes herself as patriotic, optimistic and outgoing is Ms Shen Yanan. Ms Shen, 28, works in the operations department at a real estate website in Baoding, a city of roughly three million people near Beijing. She believes China is a great country, and will do her best to make it stronger, she said.

Every evening, she watches one to two hours of South Korean soap operas on her phone. She does not have any news apps on her smartphone because, she said, she is not interested in politics. She has travelled to Japan a few times and used Google Maps there, but otherwise did not visit any blocked foreign sites.

"The Chinese apps have got everything," she said.

Ms Shen's friend Chu Junqing, also 28, a human resources representative, said she spent two to three hours watching funny short videos after work on Tik Tok. She reads news sometimes on the news app Jinri Toutiao but found that many countries were embroiled in wars and riots. "China is so much better," she said.

Wen Shengjian, 14, wants to become a rapper and idolizes Drake and Kanye West. Shengjian, whose family moved in July from Beijing to Dongying, an oil town in eastern Shandong province, said he had noticed that American rappers were very vocal about social issues and that some even criticised the president in their music.

That would not work in China, he said, because it is a developing country and needs social stability.

That is a line that the Communist Party makes sure that the state media and school textbooks repeat all the time.

Shengjian, who likes playing basketball, said he knew the names of Google, Facebook, Twitter and Instagram. He said a friend of his father's had told him that those websites were blocked because some of their content "wasn't appropriate for the development of socialism with Chinese characteristics". "I don't need them," he said.

When young Chinese spend time abroad, many have to learn an entirely different Internet ecosystem.

That happened to Mr Perry Fang, 23, who moved two years ago from Guangzhou in southern China to study marketing in Sydney, Australia. In Sydney, he learnt a whole new set of websites, including Google, Facebook, YouTube and Snapchat.

Now, when he returns to China to visit his family for holidays, Mr Fang said, it is hard not to be able to use Google. He has also learnt not to check sensitive political news in front of his parents, who have scolded him for doing so.

"The Chinese apps become useless as soon as you move abroad," he said.

But with Google and others, "whichever country you go to, you can still use these apps", he added.

"The return on investment is very high."