BEIJING (NYTIMES) - One proposal would end financial penalties for babies born out of wedlock. Another would lower the legal age of marriage. Others would ban discrimination against mothers and mothers-to-be in the workplace and would expand or extend parental leave to fathers.

China's annual legislative session - the National People's Congress - is typically a staid affair to aggrandise Communist Party rule, but this year it has produced a flurry of proposals to address what experts and officials now acknowledge is a looming demographic crisis caused by the country's sharply declining birthrate.

The ideas now being floated by regional officials, businesspeople and others reflect the depth of the concern over the issue, but also the fact that there is not yet a clear consensus on what the government should do about it.

One deputy, Ms Huang Xihua, went so far as to propose amending the Constitution to remove all limits on family planning, which until 2016 notoriously forbade most Chinese families from having more than one child.

"The reason so many deputies are putting proposals forward is that the birthrate has declined for two consecutive years," Mr He Yafu, a demographer and the author of a book on the impact of China's population controls who helped Ms Huang write her proposal, said in a telephone interview.

"The reasons to limit births no longer exist."

The government has, so far at least, showed no sign of abdicating its heavy-handed approach to social policy - nor the vast bureaucracy that still enforces family planning laws.

For more than three decades, China enforced its "one child" policy harshly, imposing fines and in some cases abortions and sterilisations. 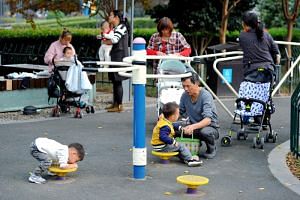 The government only relented in 2016 after experts anticipated the demographic issues that the country is now facing.

Virtually all families can now have two children, but the anticipated baby boom did not materialise.

In the past two years, births have dropped precipitously, falling by 12 per cent in 2018. The trend has prompted increasingly dire warnings that China faces a greying population and a dwindling workforce to support it in the decades ahead.

The debate at the congress might signal changes in the months ahead. Some of the proposals could serve as trial balloons to gauge or shape public sentiment, especially on such sensitive issues as marriage and gender equality.

The proposal that has generated the most attention outside the Great Hall of the People, where the congress is being held, would remove legal restrictions on children born out of wedlock.

While Chinese law nominally gives children of single mothers the same rights as others, the mothers can face fines or other penalties.

In many provinces, for example, a child can only receive a residence permit - known as a hukou - if their parents' marriage was registered.

Others require single parents to pay a "social maintenance" fee to cover the cost of public services a child receives - essentially a tax.

There have been cases where single mothers have been fired from their jobs, the Chinese news outlet Caixin noted last month in a survey of regional policies.

In a conservative society like China's, single mothers remain stigmatised, though perhaps less so than before.

A change in the law could also affect single women who choose to have children on their own through artificial insemination - either in China or abroad.

Ms Huang's proposal would remove all the legal constraints on the practice.

"Giving a hukou to children born out of wedlock is not to encourage unmarried childbearing," she said in a video interview on a Chinese website, NetEase, "but to provide them with the protection of their rights."

An enthusiastic supporter is Ms Zou Xiaoqi, an accountant in Shanghai who gave birth two years ago to a son.

She was 41, unmarried and not previously inclined to have a child when she became pregnant.

"I didn't used to particularly like children," she said, "but I felt I couldn't give him up."

While pregnant, she discovered that local authorities would not provide her maternity benefits, which included the cost of prenatal care and her salary during six months of leave.

She sued the local family planning council and the social services department, but ultimately lost.

"Stigmatisation is still quite powerful, especially in some smaller cities or rural areas," she said.

"These mothers do not have the courage to fight for their own rights," she said, referring to unwed mothers.

While the largely ceremonial legislature ultimately ratifies new laws, the government ministries themselves draft them and submit them to the deputies for approval, often after months or years of consideration.

It remains to be seen which, if any, of the proposals the government will take up. Ms Huang, for example, has raised her proposals before without success.

Other proposals have focused on offering incentives to families with children - through tax breaks, subsidies or greater government spending on schools and services.

Another executive, Mr Ding Lieming of Betta Pharmaceuticals, proposed lowering the legal age for marriage to 20 for men and 18 for women, from 22 and 20 today.

At least two delegates suggested laws to expand paternity leave - "to encourage fathers to share family responsibilities," as one of them, Mr Ke Jianhua, put it.

Premier Li Keqiang, who opened the congress with a lengthy work report, pledged that the government would "move faster" to develop child care services and early education, though he made no specific proposals.

He also pledged to end discrimination in the workplace, especially that facing mothers, who can lose their jobs when pregnant or on maternity leave.

His remarks echoed a directive issued in February by nine government ministries and agencies prohibiting employers from asking job applicants about their marital or childbearing status.

"We will resolutely protect against and stop gender and identity discrimination in employment," he said.