At 13, Ms Wing Tsang had little idea what it meant for Hong Kong to be handed back to China.

But she remembers it was raining heavily on that historic day.

"I overheard the old folks at home saying that even heaven was unhappy about the handover," she told The Sunday Times.

"Some people were saying the British failed to protect us and handed us back to China. But as a child, I thought the British government had been good to us," said Ms Tsang, now 32, who recalled a happy childhood where lessons were in English and there was plenty of time to play in school.

"I remember asking myself if the handover was really such a bad thing. What would happen to Hong Kong after that? But it also didn't have much impact on me. I felt it was something for the adults to worry about."

Two decades on, she is feeling the impact of events on that rainy day.

The happy Hong Kong she knew seems to have morphed into a city of uncertainties with an ever growing number of protests.

Ms Tsang who earns just over HK$10,000 (S$1,770) a month as a hairstylist, said her biggest worry is not having a place to live in when she grows old. 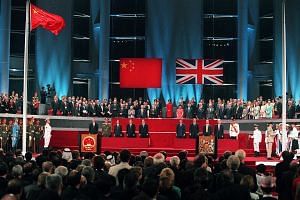 With property prices fuelled partly by an influx of mainland Chinese buyers, owning a private flat has become a pipe dream, said Ms Tsang, who lives in a 400 sq ft public flat with her parents.

She hopes to get her own public flat but was told she has to wait till she is in her 40s. She fears her pay would be over the HK$11,250-a- month ceiling for singles by then. "And if my salary increases by then, I would not be eligible, yet I still wouldn't be able to afford one in the open market," she said.

Like many, Ms Tsang is politically apathetic and worries more about livelihood issues.

"It was only in recent years that I noticed so many mainlanders coming to Hong Kong to buy up our apartments. And I began to worry. I feel an urgency to own a flat so I would feel more secure about my future," she said. "Looking back now, I can understand why the older folks wanted Hong Kong to remain under British rule."

Retired legislator Emily Lau, a reporter at that time, recalls asking then British Prime Minister Margaret Thatcher at a press conference if it was "morally defensible" to "deliver over 5 million people into the hands of a communist dictatorship". "She told me everyone in Hong Kong was happy with the agreement and I may be a 'solitary exception'," said Ms Lau, 65.

"If you read George Orwell's 1984, you'll find that 'solitary exception' means insanity and that's what she thought of me. So, to prove her wrong, I got myself elected with a whopping majority in 1991."

Looking back, I feel China's promise of '50 years no change' in Hong Kong is a very naive saying. Even if the system remains unchanged, people's perspectives and the environment will change. Education materials will change. The communist government would not be the same like the British government who recognised our Hong Kong identity. We were able to say that we are Hong Kongers. Back then we didn't have to say we were British. But today, when we want to preserve our Hong Kong identity, we are accused of being pro-independence. Admitting we are Hong Kongers and not Chinese is not separatism. It is only our identity.

The late Chinese leader Deng Xiaoping knew Hong Kongers were fearful of communist rule. So he assured them that under the policy of "one country, two systems", the city will run by Hong Kongers and enjoy a high degree of autonomy.

"But many people had no choice and the only choice was to go abroad. That's why people were very concerned about having money," said Ms Lau, the city's first directly elected woman legislator.

Hong Kong is facing its "darkest era" since the handover, said the legislator of 25 years. There are more social problems such as poverty, she noted. The young feel they do not have a future as they do not have good jobs or a good income and cannot afford a home as property prices are very high.

It was only in recent years that I noticed so many mainlanders coming to Hong Kong to buy up our apartments. And I began to worry. I feel an urgency to own a flat so I would feel more secure about my future. Many Hong Kongers' priority is having a place to live. Looking back now, I can understand why the older folks wanted Hong Kong to remain under British rule.

Like Ms Tsang the hairstylist, Ms Agnes Ao, 54, a property consultant, is concerned about the affordability of homes in Hong Kong.

She lives in a three-storey house in the New Territories with her husband and a 24-year-old son. Her elder son is married with two children and has his own home.

"I never thought I could one day own a house in Hong Kong. But I was lucky to be able to place the down payment for one when prices came down during the Asian financial crisis in 1997," she said.

'Prime Minister, two days ago you signed an agreement with China, promising to deliver over 5 million people into the hands of a communist dictatorship. Is that morally defensible? Or is it really true that in international politics, the highest form of morality is one's own national interest?' She of course was prepared for the question. 'What do you mean? Britain has done her best. We've done everything we could and everyone in Hong Kong is happy with the agreement. And you may be a solitary exception'."

MS EMILY LAU, 65, a retired lawmaker who, as a reporter, had asked Mrs Margaret Thatcher that question.

But she worries that her grandchildren might not be as lucky.

She recalled that the run-up to the handover was a volatile time, with people rushing to buy properties before midnight as prices could shoot up the following morning.

Retired bookseller Lam Wing Kee, 62, knows a thing or two - not about losing one's wealth but losing one's freedom - under communist rule. He was one of five booksellers and publishers from publishing company Mighty Currents and Causeway Bay Books who went missing for months in 2015 before turning up on the mainland early last year.

To him, one of the key events in the history of the Hong Kong Special Administrative Region is the central government's interpretation of Hong Kong's Basic Law last year - which is clear interference in Hong Kong's affairs.

Before the handover, he was more concerned about money, he said. "Back then, I was concerned about changes in the mainland and how they would affect my business," said Mr Lam, who started his shop in 1994.

"Today, I tell young people that they shouldn't be finding money to leave this place, but they should be fighting for democratic rights."

"Many of the protesters who brought their children along with them looked like they were around my age... To educate our younger generation to love the communist government is like brainwashing them," she said.

Ms Tong had at first believed that Hong Kong's return to Chinese sovereignty was "like a change in the boss of a company" and everything else would stay the same.

But within a year, Chinese lessons were introduced in primary and secondary schools, and many schools switched to Chinese as the main language for various subjects.

"Looking back, I feel China's promise of '50 years no change' in Hong Kong is a very naive saying. Even if the system remains unchanged, people's perspective and the environment will change. Education materials will change," Ms Tong said.

One prickly issue 20 years on is that of Hong Kong's identity.

She said: "We were able to say that we are Hong Kongers. Back then, we didn't have to say we were British.

"But today, when we want to preserve our Hong Kong identity, we are accused of being pro-independence. Admitting we are Hong Kongers and not Chinese is not separatism. It is only our identity."

A version of this article appeared in the print edition of The Sunday Times on June 11, 2017, with the headline 'A city of uncertainties after the handover'. Subscribe
Topics:
More
Whatsapp Linkedin FB Messenger Telegram Reddit WeChat Pinterest Print Purchase Article Copy permalink