Equipment malfunction in Wuhan plant led to defective batches made in 2016: Regulator

A total of 400,520 doses of DTaP vaccine made in 2016 by state-owned vaccine maker Wuhan Institute of Biological Products, in Wuhan, Hubei province, were sold in Chongqing municipality and Hebei province. The vaccine can prevent diphtheria, tetanus and whooping cough in infants.

The State Drug Administration (SDA) said in a statement on Tuesday that the primary cause of the sub-standard vaccines was a temporary malfunction of equipment that resulted in an uneven ratio of liquid in doses to be packaged, based on an inspection of the production site and the company's analysis.

The administration said inspectors found that while the vaccines were safe, they may not be effective in preventing whooping cough.

It dispatched investigative teams to the company following discovery of the sub-standard products.

Meanwhile, the company recalled in May all unused vaccines and destroyed them under the supervision of the local drug authority, the SDA said.

The company received punishment such as fines, it added.

Following the incident, the SDA inspected all 30 batches of DTaP vaccine the company later produced and found they were up to standard, it said.

Health authorities in both Hebei and Chongqing announced earlier last month that they had found no signs of major health risks associated with the sub-standard vaccines, and said they would administer new vaccinations to any children who had received the sub-standard product.

An official of Wuhan's food and drug administration said most of the sub-standard vaccines produced by the Wuhan company had been used, the Chengdu Economic Daily newspaper reported.

The watchdog's statement on Tuesday came after China's Cabinet this week vowed tough penalties and fines over a vaccine safety scandal that has sparked widespread anger.

A Cabinet investigation group last Friday found that vaccine maker Changsheng Bio-technology systematically falsified production and testing records relating to a rabies vaccine to avoid regulatory scrutiny. It also sold 252,600 doses of ineffective vaccine to inoculate children against diphtheria, whooping cough and tetanus. Eighteen people at the company, including its chairman, Gao Junfang, have been ordered to be arrested over the scandal. 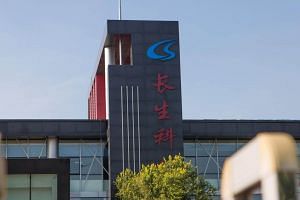 The head of India's drug regulator in comments published yesterdaysaid it has banned the import of the company's rabies vaccine.

"The vaccine is being used in India, but we don't have the exact details of the total number of units imported or where they have been distributed," Mr S. Eswara Reddy told the Hindustan Times daily.

"I have asked my staff to prepare a detailed information report on its import and distribution," he was quoted to have said.