China aims to relocate 2.8 million rural poor people from remote areas this year as it continues its push to eradicate poverty by 2020, the head of the country's top economic planning agency said yesterday.

But the central government will monitor local efforts more closely as these have not been uniformly successful, Mr He Lifeng, chairman of the National Development and Reform Commission (NDRC), told reporters.

In the past five years, the government relocated 10 million rural poor, with the number reaching 3.4 million last year alone. Most were living in mountainous and sparsely-occupied areas with hardly any schools and hospitals because it did not make economic sense to build such facilities, say experts.

Mr He said the relocation project has been largely successful in improving the people's living standards, but also acknowledged that there have been problems as well.

Media reports in recent years told of relocated villagers abandoning their new apartments to return to their mud huts because they were unable to find work in the city or because the amenities they had been promised were not available.

Guizhou province, for instance, made news last year when some relocated residents moved back to their village to grow vegetables because they could not afford the high cost of living in the city. 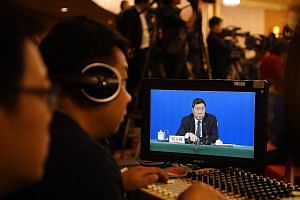 "To address the various problems that crop up in the process of relocating and helping the poor, we will organise large-scale, targeted and stronger field inspections," he added.

Even as millions of villagers are being resettled in towns and cities, China will launch a major rural revitalisation drive. It will improve infrastructure for supplying water, power, and high-speed Internet access to villages, and build or upgrade 200,000km of rural roads, Premier Li Keqiang said on Monday.

Rural development expert Wang Sangui from Renmin University said the government needs to consider more innovative methods to tackle extreme poverty in regions such as Tibet and Qinghai that arise from historical and cultural reasons.

For instance, a different approach has to be found for nomadic communities in Tibet, he said, while families that do not see the immediate benefit of sending their children to school may be persuaded if cash incentives are given for regular class attendance.

"Some of these communities have lived in extreme poverty for generations, and lag behind in development because of various reasons," said Professor Wang. "For us to succeed in these regions, there has to be more policies tailored to their circumstances."

A version of this article appeared in the print edition of The Straits Times on March 07, 2018, with the headline '2.8m rural poor to be resettled in bid to drive out poverty by 2020'. Subscribe
Topics:
More
Whatsapp Linkedin FB Messenger Telegram Reddit WeChat Pinterest Print Purchase Article Copy permalink