Rainstorms trigger landslide in eastern part of country; over a million people evacuated

SHANGHAI • At least 18 people were killed and 16 others missing as Typhoon Lekima lashed eastern China yesterday, toppling thousands of trees and forcing more than a million people from their homes.

Waves several metres high hit the coastline as the storm made landfall in Zhejiang province, south of Shanghai. The deaths were caused by a landslide triggered by the storm's downpour in the municipality of Wenzhou, around 400km south of Shanghai, national television station CCTV reported.

"Torrential rains caused a landslide on a mountain that blocked a river below," it said, adding that the resulting "dam" created a lake which swept downstream when it burst.

More than a million people were evacuated from their homes ahead of the storm, the official Xinhua news agency reported.

Around 300,000 people were relocated in Shanghai, where the high-speed maglev train that links the city to one of its airports was suspended.

Shanghai Disneyland was also closed for the first time since the amusement park opened in 2016, while more than 25,000 tourists were evacuated last Thursday from Putuo Mountain, south-east of Shanghai, according to local media reports.

The monster storm made landfall in the early hours, packing winds of 187kmh, and was expected to churn up the east coast towards Shanghai, Xinhua added.

It was downgraded from a super typhoon to a typhoon as it headed northwards inland. 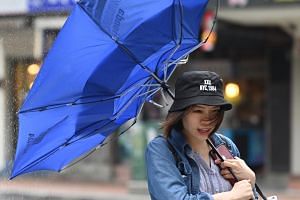 China battens down for typhoon

Footage broadcast on CCTV showed a torrent of muddy water surging through the streets and emergency workers rescuing a man trapped under rubble and fallen trees. One street in Yueqing city, which is part of Wenzhou, was shown completely flooded.

China issued a red alert along the coast - the most serious of its four possible typhoon warnings - before the storm arrived. A red alert authorises officials to order evacuations, suspend train and air travel, and force ships back to port.

The storm struck China after veering north of Taiwan, where city and county governments had cancelled work and classes on Friday in anticipation of heavy rainfall and strong winds.

Nine people were injured, thousands of homes lost power temporarily and more than 500 flights were cancelled in Taiwan.

With the typhoon tracking towards the capital Taipei and other major cities in the area, shoppers cleared grocery store shelves of fresh produce in anticipation of being stuck indoors for the day.

More heavy rain was forecast for the Shanghai area and the neighbouring provinces of Anhui, Jiangsu and Zhejiang, with the authorities warning of possible flash floods, mudslides and landslides caused by the downpour.

The provincial authorities in Jiangsu province said operations were under way to increase drainage of major lakes and ports in the region to bring down water levels before the rainstorms, according to local media reports.

The authorities in the eastern province of Shandong said that torrential flooding was likely in parts of the province for several days, adding that the downpour would also help ease drought concerns and replenish reservoirs.