PORT DICKSON • Army and police personnel, along with their spouses, queued up at polling stations yesterday for early voting in the by-election here.

Most of these men and women in uniform will be on duty on Polling Day on Saturday. The Port Dickson parliamentary constituency has a total of 75,000-plus registered voters.

The Election Commission said 63 per cent of the 7,268 early voters turned out. The vote took place just hours after an important show of unity by Datuk Seri Anwar Ibrahim, 71, and Prime Minister Mahathir Mohamad, 93, amid rumours of poor relations between them.

The two political giants held up their hands together on Monday evening, the first time they had campaigned side by side in 20 years.

Mr Anwar was deputy prime minister in September 1998 when he was sacked by then premier Mahathir.

"This is the first time in 20 years I am on the same stage with my old friend, Tun Mahathir," Mr Anwar said. 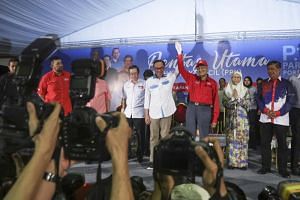 The rally was attended by more than 2,000 people, a large crowd in the small beach town, with the rally's Facebook Live telecast notching up 16,700 viewers at one point.

Mr Anwar, in a gesture that he is not in a hurry to return as a lawmaker and replace Dr Mahathir as premier, said: "I accept he is the best man to lead the country now."

He added: "I am saying this with all humility. I know him. I love him as a father and a leader."

Endorsing Mr Anwar's candidacy in the by-election, Dr Mahathir in his speech wanted voters to pick the Pakatan Harapan candidate, so that "we can work for the country we love and for the Malaysian people who have allowed us to take over the administration of this country".

Mr Anwar is expected to win the seven-cornered fight.