China and the United States are more willing to reach a deal on their trade dispute as both their economies are hurt by its effects and the global economy slows, experts told a forum here yesterday.

But the relationship between the world's two major powers has become more contentious, and how it develops will have an impact on the South-east Asian region.

Both the US and China have incentives to try and reach a trade deal, said Ms Bonnie Glaser, senior adviser for Asia and director of the China Power Project at the American think-tank Centre for Strategic and International Studies.

"The worsening of the global economy and the volatility in the stock markets, certainly in the United States, will have an impact on how President (Donald) Trump thinks about negotiations with China," she said in answer to a question at the annual Regional Outlook Forum organised by the ISEAS -Yusof Ishak Institute.

Also, the longer the current tariffs remain in place in the US, the higher the potential for them to increase further, which will affect the American economy even more than they have so far.

"I believe there is a growing desire on the part of President Trump for a deal. At the end of the day, President Trump wants a win, he doesn't want tariffs. Tariffs are not a win," she noted.

As for China, its economy is hurting too, leading the Chinese government to take stimulation measures.

Professor Zha Daojiong of the Institute of South-South Cooperation and Development of the School of International Studies at Peking University, pointed to the reinstating a few days ago of big-ticket projects that were put on hold last year and which are "not going to pay off".

Answering a question on whether the trade war would undermine China's development, he said many of the US demands "are in line with policy directions that we want to go".

Giving, as an example, the US' call for an end to the requirement for joint ventures - through which American firms are forced to transfer technology to their Chinese partners - he said this is "something we need to get rid of ourselves".

He added: "China has to adapt and adjust to the forces of globalisation just like any other economy."

Ms Glaser said the tariff war is one of the signs that the relationship between the US and China has become increasingly contentious, with strategic competition the dominant feature of ties and cooperation diminished. 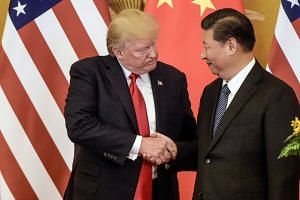 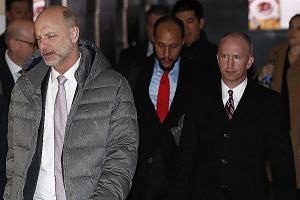 The first is a successful trade deal and moderation of tensions in other areas, with a trade deal providing the momentum towards the return to the US policy of strategic hedging, in which there is a more even balance between competition and cooperation.

In such a scenario, there is some room for South-east Asian countries to manoeuvre and successfully navigate between the two powers. Asean centrality can be sustained, but a lot of work is needed by Asean to ensure that it does remain relevant, Ms Glaser said.

The second is that of a 21st-century version of the Cold War, with intensification of competition militarily, economically and ideologically. Countries in the region could be compelled to take sides.

The third scenario is a grand bargain between the US and China, the contents of which might not be favourable to the region.

However, it could head off competition between the two powers, which would be in the interest of the region.

The experts agree that containment of China is not a good policy.

Mr Peter Varghese, chancellor of the University of Queensland in Australia, said China is too enmeshed in the international system and too important to the region to be contained.

"China's rise needs to be managed, not frustrated; it needs to be balanced, not contained," he said.

Prof Zha noted that when Chinese leaders say the Pacific is wide enough for the two powers, their message is that China and the US can coexist peacefully while having different political systems, and that "there is space for both of us to develop along the path we choose for ourselves".

On Asean's role, he said it was time the regional grouping tried to mitigate the effect of the instinct of China and the US towards rivalry.