World's top spenders travelled with even bigger wallets in 2017

Accompanied by her parents and two young sons, Beijing resident Amber Wen flew into Singapore for a two-week vacation earlier this month, undeterred by the incessant rain from the north-east monsoon.

Sentosa island, Marina Bay and the Science Centre were among the attractions on the must-see list of the 34-year-old psychologist, who first came to Singapore in 2013.

“I was here a few days for work and fell in love with the country, especially for how safe and kid-friendly the city and attractions are,"  said Ms Wen, whose sons are two and five. "There just the peace of mind from not having to worry about errant traffic or my children going missing, even at a crowded spot."

Like Ms Wen, thick crowds of Chinese travellers have become a force to be reckoned with: both globally and in Singapore, where they are set to top the list of visitors here last year.

They spent 19 per cent more than in 2016, according to the World Tourism Organisation, which puts China in the top spender spot globally for the sixth year in a row, ahead of the United States.

More than 2.7 million  Chinese came to Singapore from January to October last year, representing almost one-fifth of all visitor arrivals,  according to Singapore Tourism Board’s figures out earlier this month (Jan 5).

To further cement its importance to Singapore’s tourism sector, the Chinese  account for almost 18 per cent of tourism receipts for the first half of last year. This puts it on track to become top-spenders in  Singapore for the third year in a row.

In 2017, Singapore tourism sector is estimated to directly and indirectly employ more than 320,000 people, and contributes about 4.5 per cent to Singapore Gross Domestic Product (GDP), according to latest statistics from the World Travel and Tourism Council.

STB attributes the strong growth to greater flight connectivity between the two countries, as well as intensified efforts to woo travelers from China’s tier one and two cities.

It has, for instance, built partnerships with major Chinese tech companies such as Baidu, Tencent and Meituan-Dianping, said STB’s regional director for Eastern and Southern China Low See Peng.

About 1.85 million viewers tuned in to the two-day event,  Ms Low added.

But the boom  in Chinese tourist dollars may be tough for Singapore to sustain.

The archetypal Chinese tourist on a package tour and obsessed with buying luxury goods is also disappearing fast.

A Financial Times (FT) survey of Chinese tourists last year found that spending on shopping overseas fell almost across the board, particularly for luxury goods such as watches and electronics.

More Chinese are also becoming independent travellers keen to go beyond the Asia Pacific, with “even first-time travellers focused on making memories rather than stuffing their suitcases” said the FT.

While Singapore ranked eighth on the list of most recently visited countries, it did not make the list of countries travellers wanted to go to next. The top five dream destinations were in Europe. 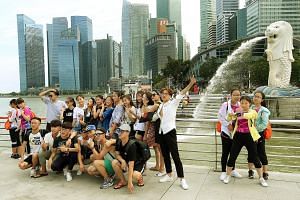 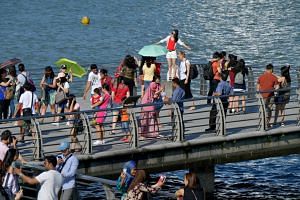 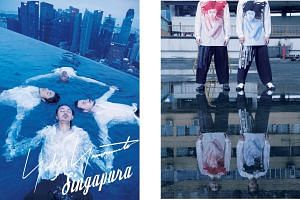 Similarly, Seoul suffered a plunge of more than 40 per cent last year - no thanks to a missile systems deployment dispute with Beijing. Since last March, China has unofficially banned group tours to South Korea.

“The overlap of politics, economics and tourism must be considered because China has integrated outbound tourism into its foreign policymaking and trade negotiations,” said Asia tourism analyst Gary Bowerman, who runs travel research agency Check-in Asia.

“Our top 15 markets are a good mix of short and long haul markets, and we continue to see good growth in visitor numbers from markets such as Indonesia and India, as well as emerging markets like Myanmar,” she added.

At the same time, STB will  continue to woo the Chinese, she said, by promoting Singapore as a choice destination for family travel, and curating tours to incorporate richer storytelling and the authentic local experiences  more Chinese  want.

This sits well with Ms Wen, the mother-of-two, whose visit to Singapore this month was primarily for a parent-and-child education camp, a growing trend in China.

Her five-year-old son attended a kindergarten on weekdays, where he was immersed in an English-speaking environment and interacted with local kids, and the family would see the sights in the evenings and weekends.

“Your travel needs change when you have children, and I’m always on the lookout for destinations that let them experience another country while interacting and learning with kids from there,” she said.