Beijing has pushed back strongly against what it called an absurd and racist worldview promoted by a senior US official last week that framed US-China competition as a clash of civilisations.

Such discourse is destined to fail if it stems from an ulterior motive to provoke friction, deputy head of the Chinese Communist Party's Publicity Department Xu Lin said yesterday.

But, noting how different civilisations can co-exist "has become the question of our time", Mr Xu said China will hold a conference this month to promote exchanges and mutual learning instead of confrontation among civilisations.

The first Conference on Dialogue of Asian Civilisations will kick off next Wednesday, bringing together participants from 47 Asian countries with the goal of promoting cooperation among them.

"(It) seeks to replace civilisations' estrangement with exchanges, clashes with mutual learning, and superiority with co-existence," said Vice-Minister of Foreign Affairs Kong Xuanyou at a press briefing.

China's announcement of the conference came days after it rebuked US State Department director of policy planning Kiron Skinner, who said at a think-tank event last week that the rivalry with China is the first time the US is facing a great-power competitor that is not Caucasian, as even competition with the Soviet Union had been "a fight within the Western family".

"This is a fight with a really different civilisation and a different ideology, and the United States hasn't had that before," she said. 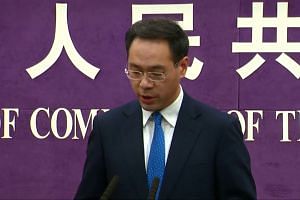 Trump says China 'broke the deal' in trade talks, will pay through tariffs

"Nor has it had an economic competitor the way that we have (today with China)."

Ms Skinner said the State Department was developing a comprehensive China policy in the vein of "the X Article" in 1947, which outlined the containment strategy the US used for the rest of the Cold War.

"It is simply absurd and utterly unacceptable to look at China-US relations from a clash-of-civilisations or even a racist perspective, which deserves every harsh rebuke and resolute opposition," he told a regular press briefing.

Chinese media had also slammed her remarks, with China Economic Net warning that using a "clash of civilisations" thinking to shape policy risked a downward spiral in US-China relations.

The Global Times tabloid accused Washington of trying to use the concept of Western civilisation to rally other countries against China.

"The primary purpose of the US is probably to win over fence-sitting Western countries to join Washington in attempting to contain China (but), except for certain fanatical political elites inside Washington, few people around the world would welcome battles between civilisations," it wrote.