Beijing came in for criticism by veteran diplomats yesterday at a conference in Jakarta, for its apparent move to split Asean over the territorial claims in the South China Sea.

The speakers at the event had strong words for the Chinese, whose Foreign Minister Wang Yi on Saturday announced a four-point consensus with Brunei, Cambodia and Laos on the issue. Mr Wang said the four had agreed that the territorial disputes were "not an issue between China and Asean as a whole".

Mr Ong Keng Yong, who is Singapore's Ambassador-at-Large, said the announcement amounted to China meddling in the internal affairs of the regional grouping. 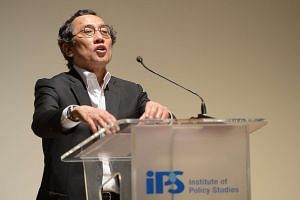 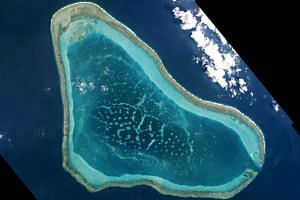 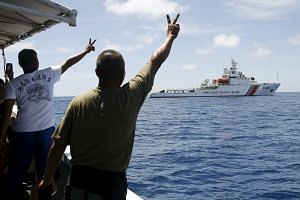 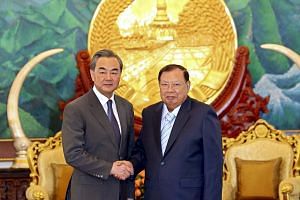 "Having (the Chinese) Foreign Minister announce that two of non- claimant states, namely Cambodia and Laos, have decided that they are not going to do this and that, seems to me like interfering in the domestic affairs of Asean," said the former Asean secretary-general.

This latest development comes amid growing tensions in the region due to the overlapping claims of Brunei, China, Malaysia, the Philippines, Taiwan and Vietnam in the South China Sea.

Mr Ong said he was surprised by the announcement at the weekend in Laos, the current Asean chair.

Having (the Chinese) Foreign Minister announce that two of non-claimant states, namely Cambodia and Laos, have decided that they are not going to do this and that, seems to me like interfering in the domestic affairs of Asean.

MR ONG KENG YONG, who is Singapore's Ambassador-at-Large, on the four-point consensus announced on Saturday

"We have agreed among ourselves in Asean that dispute concerns have to be worked out bilaterally," he added. "But as far as the Asean position is concerned, Laos is the chairman this year, maybe as chairman it has decided to say something on behalf of the group?

"So we are not very sure at this moment what is the context in which the Chinese Foreign Minister is talking about at this aspect."

Mr Ong also said Asean's cooperation with China was based on the Declaration on the Conduct of Parties in the South China Sea - an initiative Mr Wang had "a hand in" previously. "At that time, whatever Asean wants, we'd probably get it because we were the beautiful young lady that the man (China) wants," he added.

Mr Bilahari Kausikan, who is policy adviser to Singapore's Ministry of Foreign Affairs, also alluded to the Chinese diplomat's history with Asean. "In his previous appointments in the Foreign Ministry, I think it is fair to say he played a leading role in forging China-Asean relations," he added.

Mr Kausikan was also speaking at the conference, organised by The Jakarta Post newspaper and the Pacific Economic Cooperation Council.

He agreed with Mr Ong that the "so-called consensus" was not "a very good development".

"It seems that it can be interpreted as a means to divide Asean and perhaps ahead of the arbitral tribunal decision to come in a month or so," he said, referring to the upcoming ruling on Manila's petition to The Hague against China's claims.

He added that any attempt by Beijing to split the bloc would be "very shortsighted" because a divided Asean is not in China's interest.

A third speaker, former Indonesian foreign minister Hassan Wirajuda, said he was concerned that Asean "is unable to cope with the increasing tensions, or peacefully resolve the disputes and situations in question". "The region has no process, procedures and mechanisms as well as a culture of peaceful resolutions to deal with current tensions and political conflicts," he said.

Mr Ong, however, said Singapore, the Asean-China dialogue partnership coordinator, will try its best to maintain the Asean position. "We'll try to make sure that whatever we do as Asean, we are working within the agreed parameters," he said.

He added that Singapore's ties with China were strong and "hopefully this will help to provide Singapore with a bit more persuasive influence on all parties concerned".