China and Japan have signed a wide-ranging package of cooperation agreements as the two countries agreed to turn the page for a new chapter of normalised ties.

Against the backdrop of shared trade friction with the United States, both countries inked US$2.6 billion (S$3.6 billion) worth of deals. They also agreed to deepen economic cooperation, find ways to better manage sensitive issues, and play a constructive role in the region's peace and prosperity.

The warming bilateral ties came as Prime Minister Shinzo Abe began a three-day visit to Beijing on Thursday, the first by a Japanese prime minister in seven years.

Sino-Japanese relations have "returned to the right track and regained positive momentum" because of joint efforts by both sides, Chinese President Xi Jinping said when he met Mr Abe at the Diaoyutai State Guest House last night.

Mr Xi also said that both countries are becoming increasingly interdependent and should not be threats to each other.

Agreeing, Mr Abe said he hoped to start a new era of bilateral relations as the two countries marked this week the 40th anniversary of the Treaty of Peace and Friendship between Japan and China. He also invited Mr Xi to visit Tokyo, which a Japanese government spokesman said Mr Xi will "seriously consider".

Earlier in the day, Mr Abe met Premier Li Keqiang at the Great Hall of the People, and the two leaders witnessed the signing of more than a dozen cooperation documents.

These included restarting a currency swap agreement that was dropped in 2012 and setting up a yuan clearance bank in Japan.

The two leaders also attended the first China-Japan Third-Market Cooperation Forum, a new platform for both sides to work together on Belt and Road projects in other countries.

Mr Li said 51 deals amounting to more than US$18 billion were inked at the forum, which showed the deep potential for third-party market cooperation.

"This will surely become a new pillar of pragmatic cooperation between China and Japan," he said. 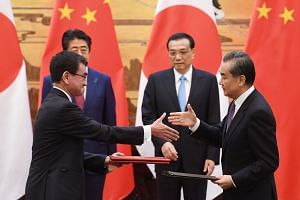 A look at China-Japan relations through the years

Japan draws closer to China and Russia at economic forum

Hopes high as Abe arrives in Beijing for Sino-Japanese summit

Intentions to deepen not only economic ties, but also exchanges between officials, were also evident from some of the other agreements, Mr Abe's spokesman Takeshi Osuga told reporters.

He cited an agreement between their foreign ministries to increase exchanges and cooperation, as well as another to work towards an exchange of visits by defence ministers and to restart reciprocal port calls by each other's naval vessels.

Both sides exchanged fleet visits between 2007 and 2011, but these came to a halt after bilateral ties soured in 2012 when Tokyo "nationalised" disputed islands in the East China Sea also claimed by Beijing.

Experts said the new rapprochement came after Tokyo and Beijing realised they needed to put aside differences in order to tackle new challenges, such as US President Donald Trump's unilateralist and zero-sum approach to trade and foreign relations.

"The visit (is the culmination of) a quiet process of mutual accommodation over the past year (and) reflects realism and self-interest on both sides," wrote Brookings Institution senior fellow Jonathan Pollack.

Despite their countries' political and military rivalries and enduring historical grievances, both leaders showed "growing disquiet about larger international trends that could seriously harm the interests of both states", he added.

Chinese state media, however, rejected the claim that warming ties are a short-term marriage of convenience in the face of US intransigence.

"Though the US is quite an influential factor in China-Japan ties, the effect is limited," the Global Times said in an editorial. "If Beijing and Tokyo intend to plan their future bilateral relationship based on Washington's attitude, they will only get lost."

China Foreign Affairs University professor Zhou Yongsheng agreed, noting that the current ties are the culmination of years of work by both countries.

"Both sides have learnt over the years that issues like the East China Sea can't be solved in the short term, and provoking each other will go nowhere," he told The Straits Times.

"The agreements reached, such as on naval cooperation, show a desire by both countries to manage such issues constructively."

A version of this article appeared in the print edition of The Straits Times on October 27, 2018, with the headline 'China and Japan ink $3.6b in deals as ties warm during Abe visit'. Subscribe
Topics:
More
Whatsapp Linkedin FB Messenger Telegram Reddit WeChat Pinterest Print Purchase Article Copy permalink