China has criticised the United States for making irresponsible remarks and accused it of meddling in its internal affairs after a State Department spokesman said Washington was gravely concerned about proposed changes to a Hong Kong law that would allow individuals to be extradited to mainland China.

China's Foreign Ministry said yesterday that Hong Kong matters are purely a Chinese internal affair, and demanded that Washington cease interfering in them.

"I want to stress once more that Hong Kong affairs are purely China's internal affairs; no country or organisation has the right to intervene," ministry spokesman Geng Shuang told a regular briefing.

"The Chinese side is strongly dissatisfied with and resolutely opposed to the irresponsible and erroneous remarks made by the US about Hong Kong's amendments," he added.

Mr Geng was responding to State Department spokesman Morgan Ortagus' remarks on Monday about the controversial amendments to the Hong Kong extradition law, which sparked a massive protest in the city on Sunday.

Hong Kong, a Chinese territory since 1997, operates under a "one country, two systems" principle that allows it a degree of autonomy from mainland China. Sunday's protest was fuelled by fears that the proposed changes could erode Hong Kong's autonomy and judicial independence.

"The US shares the concern of many in Hong Kong that the lack of procedural protections in the proposed amendments could undermine Hong Kong's autonomy and negatively impact the territory's longstanding protections of human rights, fundamental freedoms and democratic values as enshrined in the Basic Law and the Sino-British Joint Declaration," said Ms Ortagus.

Ms Ortagus said the peaceful demonstration by hundreds of thousands of Hong Kongers clearly showed the public's opposition to the proposed amendments.

The US is also concerned that the amendments could damage Hong Kong's business environment and subject US citizens residing in or visiting Hong Kong to China's "capricious judicial system", she added.

But Mr Geng said the amendments come after the Hong Kong government "listened extensively to views of various sectors of the community", which led to two revisions to the current draft. 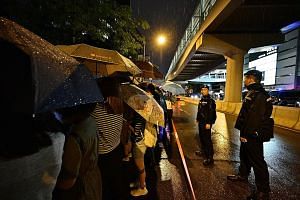 Protesters gather in HK for second wave of rallies

Beijing continues to strongly back the Hong Kong government and firmly opposes any outside interference in the territory's legislative affairs, he added.

In recent months, the US has voiced concern that Beijing has increasingly interfered with Hong Kong's internal affairs in an erosion of the territory's autonomy.

In its 2019 Hong Kong Policy Act Report published in March, the State Department said that the Chinese government implemented or instigated a number of actions that appeared inconsistent with Beijing's commitments to allow Hong Kong to exercise a high degree of autonomy.

The US believed that any amendments to the extradition law should be pursued with great care and after consultation with a broad range of local and international stakeholders who may be affected by the changes, said Ms Ortagus.

Mr Geng said the amendments had drawn a positive response from Hong Kong society, and that the rights and freedoms of Hong Kongers were fully guaranteed by the law.

The Hong Kong government has vowed to press on with the proposed changes, with a second reading of the Bill scheduled for today in the legislature.

A version of this article appeared in the print edition of The Straits Times on June 12, 2019, with the headline 'China accuses US of meddling for voicing concerns over Bill'. Subscribe
Topics:
More
Whatsapp Linkedin FB Messenger Telegram Reddit WeChat Pinterest Print Purchase Article Copy permalink