The Belt and Road Initiative (BRI) will remain a collaborative model that stresses joint consultation, cooperation and mutual benefit.

And such a model "complies with the inherent requirements of reform of the global governance system" and is part of China's vision of a community of shared future for mankind, said President Xi Jinping yesterday at a symposium to mark the fifth anniversary of the BRI.

The BRI is an ambitious plan to recreate ancient trade routes linking China to about 65 countries, from Africa to Europe, by building infrastructure such as roads, railways and ports. Critics have called into question the viability and debt risks of some of its marquee projects.

Speaking at the Great Hall of the People, Mr Xi said China plans to become an "image ambassador" for the BRI in the years ahead by standardising laws and rules governing corporate investments and operations, paying more attention to the environment, and strengthening both risk prevention and response.

For instance, Beijing set up an international expert legal panel on Sunday, both to burnish the country's legal image as well as to help the Supreme People's Court deal with the rising number of commercial disputes arising from BRI-related projects.

Against the backdrop of a brewing United States-China trade war, Mr Xi said Beijing will work hard to open up its markets, promote trade, and guide its major firms to invest and cooperate with countries along the Belt and Road, while acknowledging the need to strive for balance in trade.

Vice-Minister of Commerce Qian Keming, speaking at a news conference, said infrastructure investments may not be profitable in the short term, but many of them were public goods that had positive spillover effects and played a long-term and important role in promoting economic development of the host country.

Chinese state media, in recent days, has published glowing reports, extolling the benefits of the BRI five years after its conception. 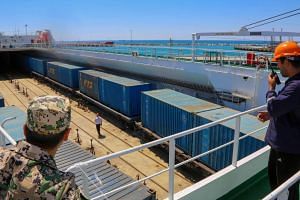 Kazakh port in decline bids for slice of China trade

A Xinhua news agency commentary said there was "widespread recognition of the initiative for illuminating the dreams of millions of people", while state broadcaster CGTN said the BRI is "curing the ills of neo-liberal globalisation... and making globalisation work for the broader community".

Yesterday, Chinese officials also sought to debunk news reports that the BRI has added to the debt burdens of some countries involved.

Vice-Minister of Commerce Qian Keming, speaking at a news conference, said infrastructure investments may not be profitable in the short term, but many of them were public goods that had positive spillover effects and played an important role in promoting economic development of the host country.

Agreeing, National Bureau of Statistics director Ning Jizhe said China had invested over US$75 billion in BRI countries over the last five years, and that its banks provided loans to projects only after they "undergo a scientific feasibility study and a rigorous loan review".

He added that some of the national debt problems mentioned in media reports stemmed from historic high debt levels in those countries, and that China was not their biggest creditor.

A version of this article appeared in the print edition of The Straits Times on August 28, 2018, with the headline 'BRI to be based on spirit of cooperation and mutual benefit: Xi'. Subscribe
Topics:
More
Whatsapp Linkedin FB Messenger Telegram Reddit WeChat Pinterest Print Purchase Article Copy permalink