Criticisms of Singapore's stance on the maritime border dispute from a senior member of Malaysian Prime Minister Mahathir Mohamad's political party are "very typical", reflecting how Malaysia expects a "subordination of our interests to their interests", retired diplomat Bilahari Kausikan said.

In a Facebook post yesterday, he shared an article in which Parti Pribumi Bersatu Malaysia (PPBM) Supreme Council member Rais Hussin said Singapore will gain nothing by hardening its stance against Malaysia in the ongoing maritime and airspace boundaries dispute.

According to Dr Rais, Malaysia has all along taken a live-and-let-live approach with Singapore, and a "naked display of nationalism", as shown by the Republic in the dispute, would be mirrored in Malaysia.

Mr Bilahari added his commentary on the post: "They have not given up - and never will - trying to tame or domesticate Singapore because unless they do so, the intrinsic shortcomings of a system based on the dominance of a particular race will be highlighted, particularly since we do better with a different system."

He added: "But if we accept a subordinate position, can we prosper? Is existence by the leave and favour of some other country acceptable? That is what this character's demands amount to."

This is why a small country should never behave the way bigger neighbours demand, he said. 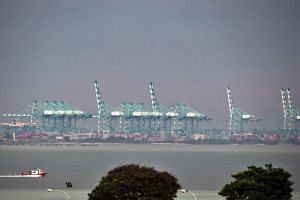 Singapore gains nothing with harder stance against KL in dispute, says PPBM strategist

In a piece written in English and carried on the Malay Mail and Malaysiakini websites yesterday, Dr Rais had said: "All put, there is nothing that Singapore can gain by hardening its stance against Malaysia" over issues such as maritime boundaries.

"It helps not to turn a spat into a spar which, repeated often enough, can be a bone spur that presses against the spinal cord of both countries."

He added: "Then what? Fight and tear at each other's faces? Singapore and Malaysia both know that wars are meant to make an orphan of all children of their respective populations."

Singapore said that Malaysian vessels had entered and remained in the Republic's territorial waters off Tuas, which Kuala Lumpur laid claim to on Oct 25 as an extension of the Johor Baru port limits.

Meanwhile, Malaysia said it planned to reclaim airspace delegated to Singapore and also protested against new flight procedures which would be implemented next month at Seletar Airport, saying that these would stunt development of the Pasir Gudang industrial district in Johor.

Dr Rais wrote: "Malaysia has taken a live-and-let-live approach with Singapore, granted that Malaysia knows that Singapore is smart enough not to spoil for a fight. Thus, Malaysia has hardly ever protested about Singapore's incursions... (into) its airspace."

Dr Rais ended by writing: "There is nothing to gain by issuing threats to interdict Malaysian ships in Malaysian or Singaporean waters. What Singapore will get is pain by a thousand cuts.

"But then if Singapore feels that its 2019 election is the perfect time to flex its muscles, Singapore should know that such naked display of nationalism is bound to make Malaysians willing to do the same. An eye for an eye does make the world go blind."