BEIJING - Asia's shared bicycle sector is undergoing a pronounced contraction that has edged out smaller players and slowed down rapid overseas expansion by some of its biggest platforms, the Financial Times reported on Thursday (July 19).

This month, Alibaba-backed start-up Ofo announced it would close its six-month-old operations in India, as well as in its two Australian sites, Sydney and Adelaide, within two months.

The news comes as the company plans to scale back its operations in four regions - Japan, South Korea, Singapore and Hong Kong - because of a cash crunch, according to Chinese business magazine Caixin.

The retreat is an abrupt reversal from its initial plans to place 20 million bikes in 20 countries by the end of 2017.

"Our focus now is on our priority markets and moving towards profitability," Ofo said in a company statement. "We are communicating with our local markets about our plans."

The company is also slamming on the brakes in the US, reportedly planning to shut down most of its US operations and lay off the majority of its workforce in the country.

Over the past two years, the Asia-Pacific sharing bike sector has enjoyed an influx of investment, allowing as many as 60 platforms to build up bike fleets and subsidise rides in an effort to outbid competitors, FT reported, citing research firm IDC. 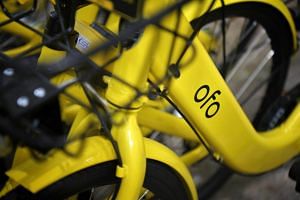 China bike-sharing giant Ofo to shut most US operations after less than a year: Report

New rules lock Ofo out of Chicago; bike-sharing firm to focus on refining operation in growing markets including Singapore

Mobike and ofo, China's largest platforms, raised nearly US$2 billion in 2017 alone. The explosion in shared bikes has been most apparent in China, where at their zenith, rows of colourful machines jostled for limited footpath space.

However, their ranks have been trimmed in recent months by a number of closures, as smaller start-ups find their financial resources quickly drained by heated competition and bike thefts, reported FT.

"Their purpose was to chase after growth and give their investors the growth story they wanted, but we quickly saw problems in their overseas expansion," Chen Lin, assistant professor at the China-Europe International Business School in Shanghai, told FT.

Earlier this July, Hong Kong-based start-up GoBee went bust, citing financial losses, the report said. A European expansion flopped after 60 per cent of its bike fleet was damaged or stolen within the first four months of the service's launch.

Chinese start-up Bluegogo, which once had 20 million riders, was one of the first major platforms to go belly-up last November.

Surviving platforms have hung on by winning the backing of China's biggest tech giants.

A month later, Ofo's main competitor, Mobike, was fully acquired by food services giant Meituan Dianping in a US$3.7 billion deal. Mobike then waived US$150 million in user deposits on its bikes in an effort to gain an edge over its competitors.

Mobike says it aims to make zero deposits a standard in the bike-sharing industry - a move that would effectively raise the cost of competitors' operations, thus edging other players out.

The boom and bust cycle shares parallels with the spending war between Chinese ride-hailing giant Didi and Uber, which battled for market share by offering subsidised rides to users.

"Of course [sharing bike companies] rely on too much on external investment and user subsidies," Mr Chen told the newspaper. "They never had a sustainable business model and blindly expanded."