Xi also tells Duterte that China will guarantee safe passage for all; Trump offers to mediate

As Asean leaders gather for their annual summits today, China is guaranteeing "safe passage" for all nations using the South China Sea. It is also willing to work with Asean to maintain peace in the strategic waterway, Philippine President Rodrigo Duterte told reporters after meeting Chinese President Xi Jinping in Danang last Saturday.

Meanwhile, US President Donald Trump has stepped in and offered to help settle territorial disputes in the waters. "If I can help mediate or arbitrate, please let me know," he said at a meeting with Vietnamese President Tran Dai Quang in Hanoi yesterday. "I am a very good mediator and a very good arbitrator."

China claims nearly all of the South China Sea's resource-rich waters, through which US$3 trillion (S$4.1 trillion) of goods pass every year, and recent militarisation in the area has led to concerns. Brunei, Malaysia, the Philippines, Vietnam and Taiwan have overlapping claims with China in the waters.

Yesterday, Philippine Foreign Secretary Alan Cayetano told reporters that Mr Trump's offer was "very kind, generous", but he could not give an instant reply. "He is the master of the art of the deal. But claimant countries would have to answer as a group or individually, and not one country can just give an instant reply," said Mr Cayetano.

Mr Duterte said he and Mr Xi discussed the arms build-up on occupied islands in the waters, and Mr Xi told him: "No, it's nothing... Don't worry, you have all the rights of safe passage."

Mr Duterte also touched on the issue at a business forum in Manila yesterday, saying: "The South China Sea is better left untouched. Nobody can afford to go to war."

Their remarks come as Asean's 10 members and China are set to announce the start of negotiations on a code of conduct to manage tensions in the South China Sea at the Asean-China Summit today. 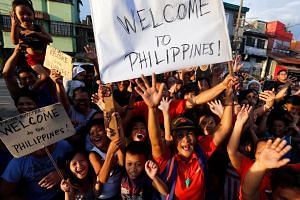 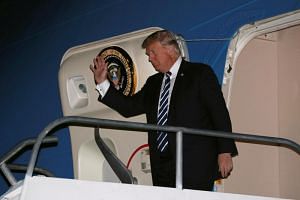 Chinese Premier Li Keqiang will attend that meeting, which he and Mr Duterte will chair. Singapore Prime Minister Lee Hsien Loong, who arrived in Manila yesterday, is also slated to speak as Singapore is currently country coordinator for Asean-China dialogue relations.

Asean Secretary-General Le Luong Minh told The Straits Times in an interview yesterday the code had to be legally binding to be able to prevent and manage incidents.

Since 2002, Asean and China have had a declaration calling on claimants to exercise restraint and stop expansion in the disputed waters. But given the kind of incidents in recent years, Mr Minh said the code "has to have that kind of distinct character that would bind parties to their commitments".

On Mr Xi's comments, he said: "Not only China but almost every party concerned has similar policies: respect for free passage, respect for freedom of overflight and maintenance of safety of navigation, and respect for international law."

Asean leaders will meet among themselves and with Mr Trump today, with the progress of regional integration, North Korea, extremism, and trade high on the agenda.

Tomorrow, the Philippines will hand over the chairmanship of Asean to Singapore, which will helm the grouping next year.

A version of this article appeared in the print edition of The Straits Times on November 13, 2017, with the headline 'Beijing to work with Asean on peace in S. China Sea'. Subscribe
Topics:
More
Whatsapp Linkedin FB Messenger Telegram Reddit WeChat Pinterest Print Purchase Article Copy permalink