MELBOURNE (NYTIMES) - Australia's second-largest city, Melbourne, is grappling with a spiraling coronavirus outbreak that has led to a lockdown with some of the toughest restrictions in the world - offering a preview of what many urban dwellers elsewhere could confront in coming weeks and months.

The new lockdown is the product of early success; the country thought it had the virus beat in June.

But there was a breakdown in the quarantine program for hotels.

Returning travelers passed the virus to hotel security guards in Melbourne, who carried the contagion home.

Even after masks became mandatory in the city two weeks ago, the spread continued.

And now, as officials try to break the chain of infections, Melbourne is being reshaped by sweeping enforcement and fine print.

A confounding matrix of hefty fines for disobedience to the lockdown and minor exceptions for everything from romantic partners to home building has led to silenced streets and endless versions of the question: So, wait, can I ---?

Teenagers are asking if their boyfriends and girlfriends count as essential partners.

Can animal shelter volunteers walk dogs at night? Are house cleaners essential for those struggling with their mental health? Can people who have been tested for Covid-19 exercise outside?

"This is such a weird, scary, bizarro time that we live in," said Tessethia Von Tessle Roberts, 25, a student in Melbourne who admits to having hit a breaking point a few days ago, when her washing machine broke.

"Our health care workers are hustling around the clock to keep us alive," she said.

"Our politicians are as scared as we are, but they have to pretend like they have a better idea than we do of what's going to happen next."

Pandemic lockdowns, never easy, are getting ever more confusing and contentious as they evolve in the face of second and third rounds of outbreaks that have exhausted both officials and residents.

With success against the virus as fleeting as the breeze, the new waves of restrictions feel to many like a bombing raid that just won't end.

For some places, risk calculations can change overnight.

In Hong Kong, officials banned daytime dining in restaurants last month, only to reverse themselves a day later after an outcry.

Schools in some cities are opening and closing like screen doors in summer.

In many areas where the virus has retreated and then resurged, the future looks like a long, complicated haul.

Leaders are reaching for their own metaphors to try to explain it.

In California, Governor Gavin Newsom has compared his opening and shutting of businesses to a "dimmer switch."

Dan Andrews, the premier in Victoria, where Melbourne is the capital, has repeatedly referred to "pilot light mode" for industries like construction and meatpacking, which have been ordered to temporarily reduce their workforces.

Whatever the metaphor, the situation is bleak.

In Melbourne, a city of 5 million that is considered a capital of food and culture, the pandemic has come raging back even after a so-called Stage 3 lockdown began in early July - until recently the highest level of restrictions. 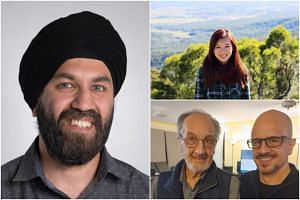 S'poreans in Melbourne hunker down amid tough lockdown against coronavirus

Officials have been flummoxed at every turn by the persistent complacency of just enough people to let the virus thrive and multiply.

Traffic data showed people driving more in July than they had during the first Stage 3 lockdown, in March and April.

Even worse, almost 9 out of 10 people with Covid-19 had not been tested or isolated when they first felt sick, Andrews, the state's top leader, said in late July.

And 53 per cent had not quarantined while waiting for their test results.

"That means people have felt unwell and just gone about their business," Andrews said.

Sounding the alarm, hee made face masks mandatory the next day, on July 22.

Still, infections have continued to rise.

They peaked at 753 new cases July 30 and have hovered around 500 a day ever since, with the death toll in Victoria now standing at 147, after 11 deaths were recorded Monday.

Those figures, while far less troublesome than those in the United States, have paved the way for a Stage 4 lockdown - what officials are calling a "shock and awe" attack on the virus - that will last at least six weeks.

Overwhelming force, with precision, seems to be the goal. 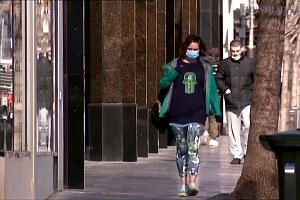 The chief modelers of the pandemic response in Australia have found that the virus can be suppressed only if more than 70 per cent of the population abides by social distancing guidelines and other public health rules.

Andrews said the new restrictions would take 250,000 more people out of their routines, in the hopes of reaching the necessary threshold.

So retail stores will be closed. Schools will return to at-home instruction.

Restaurants will be takeout or delivery only.

Child-care centers will be available only for permitted workers.

Those restrictions are already well understood. The rules requiring more explanation are tied to the curfew and industries that have to cut back.

All of which sounds clear.

But does bathroom renovation, for example, amount to home building in an apartment with one bathroom? And what about fixing things that break, like Von Tessle Roberts' washing machine?

Some businesses, such as cleaning services, are already emailing customers to say they think they can do some work, for people who pay through welfare or who need help for mental health reasons.

But, like many others, they are still seeking official clarification.

Andrews, a Labor politician sometimes described as awkward and paternal, has become the dad everyone needs answers from.

He now oversees, under the lockdown rules, what may be the country's most intrusive bureaucracy since its days as a penal colony.

On Tuesday, Andrews answered questions from reporters about dog-walking (allowed after curfew, sort of, only near home) and other subjects of great confusion at a news conference in Melbourne.

Thanking those who complied with the new rules and scolding those who did not, he announced that no one in self-isolation would now be allowed to exercise outdoors.

A door-knocking campaign to check in on 3,000 people who had Covid-19 found that 800 of them were not at home.

All 800 have been referred to the Victoria police for investigation.

Other than, say, hospital workers with formal identification, everyone traveling for a job deemed essential during the lockdown must carry a formal document - a work permit signed by the employer and employee.

For Cara Devine, who works at a wine store that closes at 8pm, that means carrying a government form with her everywhere and hoping that the police recognize her task as essential when she heads home after the curfew.

But she also worried about the Uber drivers who take her back and forth.

"Even before the newest restrictions, I've had two Uber drivers being really late picking up from the shop because they got stopped by the police, taking about an hour out of their work time," she said.

The police are already confronting opposition.

On at least four occasions in the past week, they reported having to smash the windows of cars and pull people out after they refused to provide a name and address at a police checkpoint.

The Victoria police commissioner, Shane Patton, said a 38-year-old woman had also been charged with assault after attacking a police officer who had stopped her for not wearing a face mask.

Some criminologists are questioning whether the harsher enforcement will help.

Mostly, though, Melburnians are just trying to endure.

Walking to get groceries, Peter Barnes, 56, said he welcomed the stricter rules, although he admitted his city was starting to feel like George Orwell's "1984," with the heavy hand of the state around every corner.

Those focused solely on the economics, he said, should remember the obvious: "You can't hire a corpse. Very bad employment prospects for people who are dead."

By Monday night, the city seemed to be in listening mode.

The streets were emptying out, silent in hibernation.

"It's like a Sunday in the 1950s," said Mark Rubbo, the owner of Readings, Melbourne's largest independent bookstore.

He also noted that people were stocking up again on books through online orders, with a memoir called "The Happiest Man on Earth," about a Holocaust survivor, becoming a runaway hit.

Von Tessle Roberts has found another solution, perhaps just as likely to grow in popularity: Stand on your front porch and scream.

That's the name she has given to an event she posted on Facebook, set for Friday at 7pm By Tuesday afternoon, 70,000 people had expressed an interest in joining her collective shout in anguish.

"Yelling is great," she said. "It's less dehydrating than crying."