SYDNEY - A wallaby that led Australian police on a chase over Sydney Harbour Bridge earlier this month has been returned to the wild, zoo authorities said on Thursday (Jan 25).

The wallaby, which looks like a small kangaroo, held up early-morning traffic in Australia's biggest city on Tuesday, Jan 16, before being caught downtown by police officers.

"Officers took the startled macropod into police custody near the Conservatorium of Music, with the police mounted unit arriving on scene soon after to take it to the zoo for veterinary assessment," New South Wales Police said in a statement quoted by Reuters at the time.

Video filmed from a pursuing patrol car showed a wallaby, about a metre high, hopping at a clip across the famous arch-span bridge, and a policeman stifles a laugh as he drives along behind it.

"I'm from the bush, so I'm used to see them running around all over the place but I've never seen one so close to the city before," said a driver who gave his name as Ray, one of several people who called Sydney radio station 2GB about the marsupial, Reuters said.

While wallabies and kangaroos are found in both rural and leafy suburban areas, it's highly unusual to see them so close to a major city centre.

It was taken to Taronga Zoo for a veterinary assessment, where it was found to be in a serious condition after suffering stress from the ordeal. 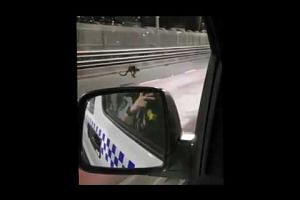 The wallaby, "affectionately named Sydney," was released into a suitable location in Ku-ring-gai Chase National Park north of the city, the zoo's Taronga Conservation Society Australia said in a statement to Xinhua on Thursday.

Blood tests showed that the wallaby was suffering from "Capture Myopathy ... a common condition in kangaroos and wallabies exposed to stressful situations or prolonged exertion," the society said.

"The wallaby made an excellent recovery in our care, eating within a day, which gave us hope that he would recover from his ordeal and be returned to the wild soon," Taronga Wildlife Hospital Senior Veterinarian Dr Larry Vogelnest was quoted as saying.