MELBOURNE (AFP) - Born in 1941, Cardinal George Pell grew up in rural Australia and, inspired by his devout Catholic mother, chose a career in the church.

His star rose fast, and in 2003 he was named to the Vatican's powerful College of Cardinals - a position that allowed him to vote in the conclaves that elect popes.

At home, he was an outspoken conservative who former prime minister Tony Abbott described as "one of the greatest churchmen that Australia has seen".

But as details of decades of sexual abuse by priests in Australia were uncovered, and the church defended allegations it mounted a cover-up, the spotlight turned to Pell and his role in the scandals.

Following is a timeline of events leading to his conviction and six-year jail sentence for historical child sexual offences:

March - Police set up a secret taskforce to investigate allegations concerning Pell. The probe is only revealed during court hearings in 2018.

February - Pell is handpicked by Pope Francis as prefect of the Secretariat for the Economy, widely viewed as the third-most powerful position in the Vatican.

March and August - Pell gives evidence on two occasions to an Australian Royal Commission into institutional responses to child sex abuse allegations against the Catholic Church.

December - Police appeal for information on alleged child sex abuse in Melbourne between 1996-2001, the period when Pell served as Archbishop.

July - National broadcaster ABC airs sex abuse allegations against Pell. He denies the allegations and suggests there is a conspiracy against him. 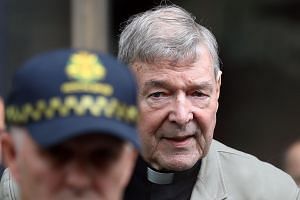 August - Pope Francis says "we must avoid a media verdict, a verdict based on gossip" when asked about the allegations against Pell.

July - Court suppresses details of the charges except that there are "multiple complainants" and "multiple charges" for "historical sexual offences".

March - Committal hearing involving witness statements and cross-examinations in Melbourne for the magistrate to decide if Pell case should go to trial.

May - Pell returns to court, where it is decided two trials involving separate allegations and locations will be held. The suppression order is expanded to reporting of court proceedings and the first trial in Australia, including online, to protect against jury bias in the second trial.

August 15 - Opening of first trial involving five alleged offences including sexual penetration and indecent acts with a child aged below 16 at St Patrick's Cathedral in Melbourne in the late 1990s.

September 20 - Jury discharged without verdict in the first trial. A retrial is ordered.

December 12 - Pell is removed from the Vatican's so-called C9 Council of Cardinals, an international advisory body set up by Pope Francis.

February 26 - Prosecutors decide not to proceed with the second trial, involving alleged sexual offences at a swimming pool in the 1970s, allowing the reporting of the first trial and verdict.

February 27 - The Vatican drops Pell as its finance chief and says it will launch an internal probe into the child sex abuse charges.

March 13 - Pell is sentenced to six years in prison for sexually abusing two choirboys in 1996-1997, with the judge describing the crime as "brazen" and a "grave" abuse of power. The judge orders that Pell serve at least three years and eight months in jail before possible parole. Pell plans to appeal.