SYDNEY (BLOOMBERG) - Australian Prime Minister Scott Morrison is seeking another term in office in elections expected in May. But with the main opposition Labor party leading in opinion polls, his Liberal-National government has a fight on its hands.

The following are the key policy areas that will determine whether Mr Morrison can pull off a surprise victory, or whether Labor will win power for the first time since 2013.

A key dividing line and an emotive topic in Australia, which is blessed with natural wonders such as the Great Barrier Reef, yet remains reliant on mining and exporting fossil fuels to keep its economy ticking.

Housing affordability is a flashpoint in the campaign. After a five-year property boom priced many young Australians out of the market, Labor is pledging to scale back tax perks for property investors, known as negative gearing.

But with the market now falling, the government says Labor's plan could crash values and derail the economy.

Another battle is being fought over imputation or franking credits that allow shareholders to reduce their overall tax liability. 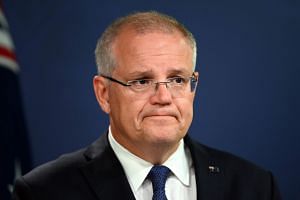 Labor is planning to tighten the concessions, saying they cost the budget more than A$5 billion (S$4.78 billion) a year.

The coalition says Labor's plan would remove an important source of income for retirees.

The coalition won office in 2013, in part due to its pledge to crack down on people smugglers ferrying refugees to Australia and "Stop the Boats".

Its tough policy of holding refugees in Pacific island camps while their claims for asylum are processed, and ensuring none will be settled in Australia, has largely seen the boat arrivals dry up.

But the issue is back on the front pages after Labor helped force through a law to give doctors a greater say in evacuating sick refugees to Australia for medical treatment.

The coalition and Labor have spent much of the past year wrangling over planned cuts to personal and corporate taxes and the issue is set to take centre stage in the election.

With government revenues improving, analysts expect some pre-ballot sweeteners when the federal Budget is handed down on April 2.