3 killed and over 150 homes razed as fires burn in New South Wales, Queensland

Fires have killed three people and razed more than 150 homes since last Friday, but cooler weather overnight provided a welcome reprieve for firefighters and residents.

The authorities were assessing the damage yesterday, with more than 100 fires still burning across New South Wales and Queensland, including several blazes that remained out of control.

Wider swathes of the states - including greater Sydney - are now bracing themselves for perilous fire conditions predicted for the coming days, as is Western Australia state.

It is the first time Sydney has been warned of a "catastrophic" fire danger, the highest possible level, since the grading system was introduced in 2009.

Conditions tomorrow in the greater Hunter region north of Sydney were also rated as catastrophic, the highest level of bush fire danger, while extreme or severe conditions were predicted for other parts of the state.

"If a fire starts and takes hold during catastrophic fire danger conditions, lives and homes will be at risk," the statement said.

The education authorities said more than 40 schools in New South Wales will be shut today due to the fires. The mayor of Glen Innes, where two people died, said residents were traumatised and still coming to terms with their losses.

"The fire was as high as 20 feet (6m) and raging with 80kmh winds," Ms Carol Sparks told national broadcaster ABC.

Five people reported missing have been found, but the unpredictable nature of the disaster means officials have not ruled out the possibility that others could still be missing, NSW Rural Fire Service spokesman Greg Allan said.

In Old Bar, which was spared the worst when the wind changed direction, hectares of bushland had turned charcoal and small pockets of flames continued to smoulder.

Mr Peter McKellar, 75, was clearing debris from his property as his neighbour's home sat in ruins.

"The firies (firefighters) saved ours," he said. "They are doing a wonderful job. They are angels." 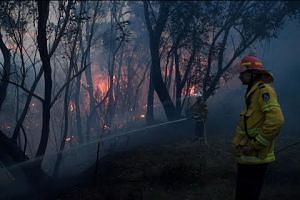 Australians warned worst bushfires may be yet to come

"We are ramping up for probably another 50 trucks full of crews to be deployed into New South Wales on Monday night ahead of conditions on Tuesday," NSW Rural Fire Service Commissioner Shan Fitzsimmons told reporters in Taree, one of the worst-hit areas. "We have seen the gravity of the situation unfold... What we can expect is those sorts of conditions to prevail across a much broader geographic area as we head into Tuesday."

In Queensland, where a state of emergency has been declared, more than 1,200 firefighters were battling over 50 active fires yesterday.

With thousands of people forced to flee from their homes, Australia's government was offering immediate emergency assistance payments of up to A$1,000 (S$930) to those affected and extended financial support to anyone unable to work as a result.

Emotions were running high at an evacuation centre in Taree, with one man breaking down in tears as he was embraced by Prime Minister Scott Morrison.

"People are under a lot of pressure," Mr Morrison told reporters. "The level of optimism, despite the circumstances, is quite inspiring."

Bush fires are common in Australia, but the country has experienced a dramatic start to what scientists predict will be a tough fire season - with climate change and weather cycles contributing to the dangerous combination of strong winds, high temperatures and dry conditions.