BRISBANE - The 31-year-old Singaporean who was charged in Australia with the attempted murder of a 20-year-old woman from Hong Kong has been remanded in custody, Australian media reported on Thursday (May 11).

The man, identified by Australian media reports as Brian Tan Guan Wen, was charged on Wednesday with attempted murder of the woman after he underwent a psychiatric assessment in hospital following his arrest the day before.

According to the Australian Associated Press news agency, he was not required to attend a scheduled appearance at the Brisbane Magistrates Court on Thursday, but was remanded in custody.

He did not seek bail and will appear again in court for a committal hearing on June 5.

Queensland police has said he allegedly hit the woman in the head with a hammer and stabbed her multiple times at a residence in the Brisbane suburb of Norman Park on Monday night. He fled on foot after the incident. 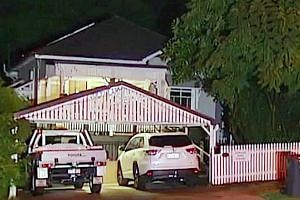 Singaporean arrested in Brisbane after attack on woman

He is said to have previously been in a relationship with the victim, who was living in Brisbane, after meeting her online several months ago.

Police said he had travelled to Australia once before to see her and arrived again as a tourist on Sunday.

The woman, named by local media as Ms Sherry Cheung, is being treated at Princess Alexandra Hospital in Brisbane for a fractured skull.

A spokesman for the hospital told The Straits Times on Wednesday that she was recovering well.

"She is very stable at the moment and is up and walking around," the spokesman said. "At this time, there are no long-term injuries that we can see. She is recovering more quickly than expected."

In a Facebook post on Thursday night, Ms Cheung said she is still in hospital for treatment and will not be discharged in the short term.

The owners of the residence, which the suspect rented via Airbnb, reportedly heard the attack, causing him to flee wearing only boxer shorts and a T-shirt. He left behind his wallet and passport.

This prompted an overnight manhunt across Brisbane, which finally ended after he was spotted by television news crews returning to the house. The reporters alerted the police, who arrested the man on Tuesday afternoon.

Queensland police are still investigating the reason for the attack.

"I can certainly assure the public that it is not a random attack," said Detective Senior Sergeant Rodney Watts on Tuesday.