Friends of Ms Cheng Shi Min, the 21-year-old Singaporean who died after plunging down a waterfall in Australia, described her as a jovial and friendly girl who also had a humorous side.

Ms Cheng, also known as Angel to her friends, was hiking with her father, her boyfriend and a family friend in the Blue Mountains National Park when the accident happened at about 1.30pm on Tuesday.

She was taken to Sydney's Westmead Hospital with head and chest injuries, but died yesterday. 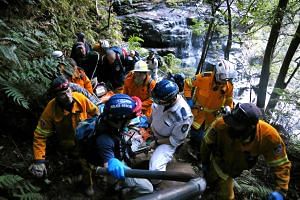 Woman from Singapore dies after falling off a cliff in Australia

Her friends who spoke to The Straits Times were shocked to hear about her death.

Ms Clarise Ong, 19, who knew Ms Cheng when they were primary schoolmates at CHIJ St Nicholas Girls' School, said: "We have not spoken in a long time, but I would get updates on Facebook and we would sometimes comment on each other's posts. I can't believe her life has ended this way when she had so much potential."

Ms Ong told The Straits Times that Ms Cheng, her senior by two years, would chat with her after classes while waiting for their parents to pick them up from school.

"She was caring, friendly and funny. Not many people would want to talk to a junior they don't know, let alone strike up a friendship," she said.

Another friend, who declined to be named, said Ms Cheng was friendly and cheerful. "We are still trying to accept that she is gone." Ms Cheng attended CHIJ St Nicholas Girls' School for her primary and secondary education, and later studied at Jurong Junior College. She then left the junior college to do her foundation studies at the University of New South Wales.

She was most recently studying early childhood education at Macquarie University in Sydney.

In a blog post four weeks ago, Ms Cheng revealed that she had recently entered into a new relationship.

A day before the hike, she had written about the upcoming trip to the Blue Mountains and how she had bought ingredients on the way home for "a mini-picnic".

In the post, she also said her boyfriend had taken the day off from work to accompany them to the national park. "He doesn't have to, but he has been nothing short of sweet," she wrote.

The Ministry of Foreign Affairs yesterday expressed its deepest condolences to Ms Cheng's family. Its spokesman said the High Commission in Canberra is in close contact with the family and will provide the necessary consular assistance.

A version of this article appeared in the print edition of The Straits Times on May 12, 2016, with the headline 'Singaporean in waterfall accident a 'jovial and friendly girl''. Subscribe
Topics:
More
Whatsapp Linkedin FB Messenger Telegram Reddit WeChat Pinterest Print Purchase Article Copy permalink