Singaporean Lew Wei Kiong, who was involved in an accident that killed a motorcyclist in New Zealand last November, has been convicted of aggravated careless driving causing death, local media reports said.

The 30-year-old, who stuff.co.nz reported cried in the Dunedin District Court during the reading of the summary of facts on Tuesday (April 12), had also pleaded guilty to three charges of aggravated careless driving causing injury.

He is due to to be sentenced on June 3.

On Tuesday, the court heard that Lew, a senior analyst at the Energy Market Authority (EMA) on holiday in New Zealand's South Island, had been driving at 120kmh at the time of the crash that killed 39-year-old Craig Alan Chambers. The maximum legal speed limit in New Zealand  is 100kmh.

It also heard that he did not brake. He also struck four vehicles, including the Harley Davidson that Chambers was riding. Another car and a motorcycle had their wing mirrors clipped while swerving to avoid Lew's rented Toyota Corolla.

Mr Chambers died at the scene. His wife, who was present in court on Tuesday, reportedly broke down as she heard the details of the accident.

Lew did not dispute the facts outlined and also offered no explanation for his driving.

"He has acknowledged his responsibility," Judge Kevin Phillips noted. 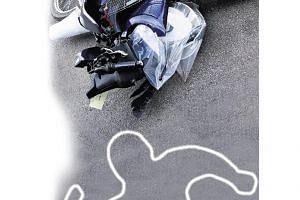 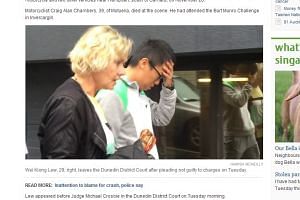 According to the summary of facts, Lew had arrived with his 31-year-old female colleague in Queenstown on Nov 20 last year.

They rented a Toyota Corolla and had left Tekapo for Oamaru, where they stopped for lunch, on Nov 29.

At about 5pm, Lew was driving on State Highway 1 - about 20km south of Oamaru - in a single southbound lane separated from two northbound lanes by double yellow lines.

He allegedly crossed the yellow lines into the northbound overtaking lane at some point. After rounding a moderate right-hand bend, Lew's car ran into a group of six incoming vehicles that were passing a vehicle pulling a horse float.

A total of three people were hurt, including Lew's female colleague, who was in the passenger seat next to Lew and had to be airlifted to Dunedin Hospital with serious injuries.

His colleague returned to Singapore the following month for further treatment. An EMA spokesman told The Straits Times in January that she was recovering well.