SYDNEY • Tensions in Hong Kong have rippled across Australian universities, as supporters of the pro-democracy protests have been targeted and harassed by "patriotic" mainland students - with the tacit backing of Beijing.

Public rallies and other acts of solidarity have been staged at several campuses during Hong Kong's two months of civil unrest, including the emergence of "Lennon walls" plastered with sticky notes extolling the virtues of free speech and democracy.

But that has angered some mainland Chinese students, who have physically confronted protesters, torn down message boards and demanded that universities provide a "pure study environment" free of political messages that "insult" their homeland.

Video from a small pro-democracy rally at Monash University last Tuesday shows a man aggressively shouting at students and manhandling someone who tries to step in, while a companion films the confrontation.

James, a 23-year-old student who witnessed the skirmish, said: "We wear masks because we know they will take photos and put it online on their social network sites and they try to find out who we are."

He said several students who participated had their details published online and at least one had been the target of harassment, including anonymous phone calls.

Nationalist activists listed a pro-Hong Kong demonstrator's home address in Melbourne on popular messaging app WeChat, and discussed reporting mainland-born Chinese who supported the students to the Beijing authorities for "welfare" when they get home. 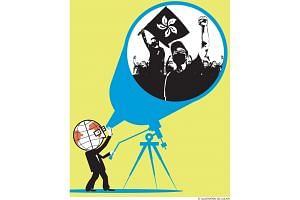 Police face off with masked protesters in Hong Kong

At the University of Queensland (UQ) in Brisbane, a handful of hard-hatted students held a demonstration on Friday in support of friends and family back home.

Student activist Drew Pavlou, who has supported the campus protests, was told to "be careful" and received messages from someone who knew his name, claimed to know his whereabouts and threatened to "kill his family".

Tensions have also been felt in New Zealand, with scuffles flaring up at the University of Auckland.

UQ said it would step up security patrols in response to the protests. Monash said security personnel attended last Tuesday's protest but "no action was required".

More than 181,000 Chinese are enrolled in Australian universities - the largest cohort of overseas students - bringing over US$6.8 billion (S$9.4 billion) into the economy yearly.