SYDNEY - For residents in the inland Australian town of Wagga Wagga, the soaring temperatures in recent days came with at least a benefit: free entry to the local swimming pool.

However, the only thing is that the mercury reached this level every day last week. On Thursday, the temperature hit 45.2 deg C, the highest recorded in the town's 170-year history.

At the pool, local resident Bo McNair welcomed the move, saying it was vital for people without air-conditioning.

"In this heatwave, I think this is a really great idea," she told The Daily Advertiser, the town's newspaper, on Thursday.

"A lot of these underprivileged kids don't have air-conditioning at home and if they can come here for free, parents are likely to bring them because they can't afford to pay A$4 (S$3.90) for each child," she added.

Australia is in the grip of a record-breaking run of summer heat, which has prompted residents and the authorities across the country to find ways to cope.

The authorities have already ordered the speed of trains in parts of Sydney to slow by 10kmh and there have been calls for greater workplace protection for those whose jobs involve working outdoors. 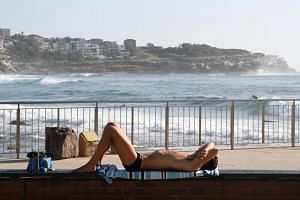 Australian towns among hottest spots on Earth as heatwave sizzles

The authorities have also advised people to take care to avoid heat stress and be alert to symptoms such as dizziness and tiredness.

In New South Wales, the ambulance service reminded parents not to leave their babies and children in locked cars, even briefly. Paramedics said the temperatures could cause heat stress that could be fatal.

Since Jan 14, at least nine children have been recovered by ambulance crews from locked cars. Separately, a pair of six-week-old twin babies suffered heat exhaustion on Thursday while travelling on a highway in a car without air-conditioning.

In central NSW, workers had to spray water on a highway near Port Macquarie after sections began melting last Thursday, The Macleay Argus newspaper reported online.

In recent days, at least 20 weather records are already believed to have been broken. The nation's capital, Canberra, set a new record of four consecutive days at or above 40 deg C. According to Weatherzone, other records to topple occurred in the NSW town of Noona, which experienced the nation's highest ever minimum temperature of 35.9 deg C, and the South Australian town of Tarcoola, which reached 49 deg C, its hottest day ever.

Thankfully, Saturday (Jan 19) brought a much-needed cool respite across the populous south-east coast, though temperatures are forecast to rise again later this week.

Inland temperatures remained high on Saturday, with towns such as Wagga Wagga experiencing a so-called "cool change" of 38 deg C, not quite high enough for free pool entry.

But temperatures have soared on the west coast, with Perth experiencing 40 deg C on Saturday.

According to a report last month by the Bureau of Meteorology and the national science agency, the Commonwealth Scientific and Industrial Research Organisation, global climate change has led to warmer temperatures in Australia, which has caused an increase in extreme weather events as well as more severe droughts.

The report said Australia has warmed by just over 1 deg C since 1910 and that most of this occurred since 1950.

Experts have urged Australia to adopt tougher action to curb carbon emissions, including encouraging a shift to renewable energy and low-carbon electricity generation.

A report on the health impacts of climate change, published in November by a group of scientists in the Medical Journal of Australia, said the nation's "policy inaction" posed a threat to Australian lives.

"Prime examples include the persistence of a very high carbon-intensive energy system in Australia, and its slow transition to renewables and low carbon electricity generation," the report said.

"However, we also find some examples of good progress, such as heatwave forecast services and response planning."