SYDNEY - Australians have voted overwhelmingly to endorse same-sex marriage but the battle is far from over.

Now that the Australian public has had its say - voting "Yes" by a margin of 61.6 per cent to 38.4 per cent - the issue will need to be resolved by the nation's 220-odd politicians and will need to overcome sharp divisions within the ruling Liberal-National party coalition.

Despite a high turnout of 79.5 per cent, the voluntary national postal vote was non-binding and has no legal force.

To legalise same-sex marriage, the Australian Parliament will now need to have its say - and the popular campaign will now give way to the wrangling of internal party politics.

Indeed, the public vote was only held because of divisions within the Liberal-National party coalition after a group of conservative lawmakers resisted moves to hold a conscience vote and insisted on first holding a national ballot. 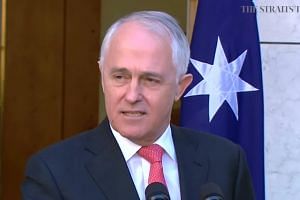 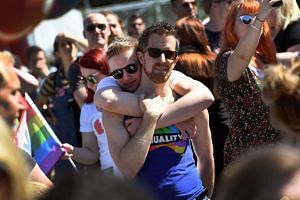 Australia's Prime Minister, Mr Malcolm Turnbull, personally supports same-sex marriage but agreed to hold the ballot when he took over as party leader of the Liberal party in 2015, effectively to try to placate the party's conservative wing.

He proposed holding a ballot and, if it passed - as it now has - allowing a free vote, or conscience vote, of all lawmakers in the Federal Parliament.

Following the release on Wednesday (Nov 15) of the vote results, Mr Turnbull said he will move swiftly to hold such a vote and wanted the Federal Parliament to legalise same-sex marriage before Christmas.

"The people have voted yes for marriage equality," he said. "Now it is our job to deliver it."

But the political hurdles remain.

Mr Turnbull has strongly opposed the legislation proposed by conservative MPs and instead supports a Bill that only allows religious figures to choose not to participate in same-sex marriages.

Such a Bill would be likely to win the support of the Opposition and should win a majority in a conscience vote.

However, Mr Turnbull may yet come under political pressure to widen these exemptions in a bid to unify his party.

Former Prime Minister Tony Abbott, who was ousted by Mr Turnbull in 2015, is a staunch opponent of same-sex marriage and has already indicated he will continue to push for a more conservative approach. Mr Abbott is publicly unpopular but has become a vocal champion of conservative causes in Australia and has clout among conservative Coalition MPs.

"I look forward to a … bill to implement same sex marriage with freedom of conscience for all, not just the churches," Mr Abbott said.

Another hurdle is the continuing dual citizenship crisis, which has led to eight MPs being disqualified because they are foreign citizens.

Some MPs - mostly opponents of same sex marriage - have suggested the citizenship saga should be dealt with before the same-sex marriage issue.

Mr Turnbull is likely to push ahead, but the precise details of the law that will - eventually - allow same-sex marriage remain a work in progress.