SYNDEY - The iconic Sydney Opera House will be lit in the colours of the French flag to pay tribute to the victims of the Paris terror attacks.

New South Wales premier Mike Baird tweeted the decision to light up the sails of the Opera House, following a suggestion from Australian journalist Mike Carlton, reported the Guardian.

"Tonight the sails of the Opera House will be lit in the blue, white & red of the French flag. We mourn with you and stand with you, Paris," Mr Baird tweeted.

The Opera House is expected to be lit at 9pm on Saturday.

Mr Baird added that he had also asked for a French flag to fly over the Harbour Bridge.

Brisbane Mayor Graham Quirk said the river city's Story Bridge would also be lit up in red, white and blue on Saturday night in a show of solidarity. 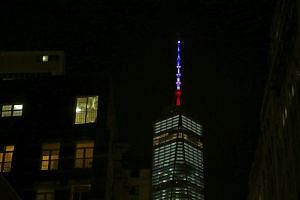 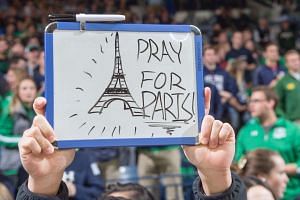 Australia's move followed several gestures from the US to show solidarity with France.

New York lit the one World Trade Center, the tallest building in America, in red, white and blue - a powerful symbol of US friendship and support for the French. Its 408 foot (124-meter spire) is so large it can be seen across much of America's largest city.

Other US buildings also lit themselves in the colours of the French flag, including San Francisco's city hall and Texas' Omni Hotel.

People around the world expressed their solidarity with Paris after the attacks.

Celebrated guerilla artist Banksy on his Twitter account made a plea for "Peace for Paris," posting a painting in which the iconic lines of the Eiffel Tower were fashioned into a peace symbol. The image was re-tweeted thousands of times.

Two church services will also be held in Sydney to remember the scores of victims killed in the unprecedented attacks, reported website The Australian.