AUCKLAND - New Zealand Prime Minister Jacinda Ardern's cat was killed in a car accident on Tuesday (Nov 7), barely two weeks after it became a social media sensation for being named the country's first ever "First Cat".

Paddles' death was confirmed by Ms Ardern's press secretary, who told local media: "Sadly Paddles was run over by a car near the Prime Minister's home in Point Chevalier."

"To anyone who has ever lost a pet, you'll know how sad we feel. Paddles was much loved, and not just by us. Thanks for everyone's thoughts," she wrote.

The ginger and white cat - who was adopted from the New Zealand Society for the Prevention of Cruelty to Animals - was known for its polydactyl abnormality, which meant it had extra claws resembling thumbs. 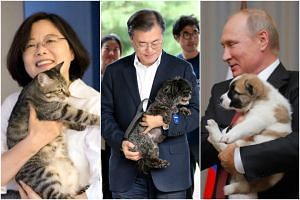 Mr Gayford had earlier this week wrote about an incident where the cat nearly derailed Ms Ardern's phone call with US President Donald Trump.

"She leapt up onto the chair next to Jacinda and began announcing her very squawky arrival," he said.

Tributes to Paddles poured in quickly on social media, including a condolence tweet from the US Ambassador's dog Gracie Brown.

"My mom, Dad and I are very sorry to hear about @FirstCatofNZ. We will all say a prayer tonight," the tweet said.

My mom, Dad and I are very sorry to hear about @FirstCatofNZ. We will all say a prayer tonight. 🙏

RIP lovely Paddles, @FirstCatofNZ. Your loyal subjects will all miss you. Gone too soon. 😿