Crop scientist Robert Furbank opens a light-filled cabinet to inspect a rice plant, the tops heavy with grain. It looks like any other rice plant except that this one, in a lab in the Australian National University in Canberra, is a prototype that could revolutionise rice farming and greatly improve rice harvests in the decades to come.

"The future of rice could be in these cabinets," Professor Furbank said, pointing to several growth cabinets that can reproduce the light, temperature and other conditions that rice plants need to thrive.

The prototype is the result of nearly 10 years of research that is among the most ambitious on the planet and involves a consortium of universities in eight countries. It is funded in part by the Bill and Melinda Gates Foundation and is led by Oxford University.

The goal is to re-engineer the rice plant using genes from maize, or corn. The aim is to raise rice yields by at least 50 per cent while using far less water and fertiliser to grow. If the researchers succeed, it will trigger another green revolution.

And it can't come soon enough.

In an oft-repeated estimate, the UN says food production needs to increase by 70 per cent by 2050. No one really knows exactly how much more rice will need to be produced. But what experts do know is that rice farming will only become more challenging because of greater weather extremes caused by climate change and limits to expanding crop acreage because of competing demand for land from cities, industries and other crops. 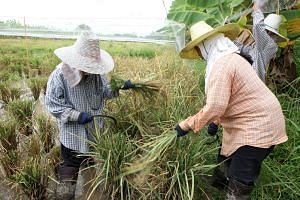 Wild swings in the global output of rice, and other cereals such as wheat, can trigger huge spikes in prices, mass unrest and starvation. So scientists are urgently trying to develop crop varieties that yield bigger harvests and can tolerate wilder swings in the weather. Plants of the future will have to cope with extreme heat, drought and floods.

"We need stability," said Prof Furbank. "We can't be in that situation where the supply of our major cereal crops is oscillating in response to climate change. We need to have that stability that will ensure our future food supply."

It's the urgent need for stability that underpins the programme called the C4 Rice Project. The International Rice Research Institute near Manila is a major partner and will be key to getting super rice out to farmers in the future.

At its simplest, the consortium aims to make rice plants much more efficient in the way they harness sunlight, carbon dioxide (CO2) and water - the basic ingredients for photosynthesis.

Plants have evolved different types of photosynthesis, some more efficient than others.

Rice and wheat belong to the less-efficient C3 type and have pretty much reached the maximum amount of grain they can produce, despite many thousands of different varieties developed.

Maize and sugar cane belong to the C4 photosynthesis group and, like a high-tech assembly line, their leaves use sunlight, CO2 and water much faster and much more effectively to produce the sugars and other complex compounds that plants need to grow.

Inside the C4 plant leaf is a system that effectively turbo-charges CO2 capture and processing.

The consortium wants to insert this same process into rice. But to do so means re-engineering the insides of the rice leaf - in effect turning rice into a C4 plant.

Nothing on this scale has been done before. It's an incredibly ambitious project and involves replicating the biochemistry and internals of a C4 plant leaf. Can it be done?

The C4 Rice Project team are already about halfway there.

The rice plants in the ANU, in the Research School of Biology building, already have the genes inserted for the biochemistry part.

"These aren't yielding any better than traditional rice plants because we haven't managed yet to bring the biochemistry together with anatomy and the leaf structure," said Prof Furbank, who runs the Australian Research Council Centre of Excellence for Translational Photosynthesis at the School of Biology.

"But they have got all the enzymes installed and ready to go to make them perform like maize when we can bring it together with the appropriate anatomy."

Another senior consortium member, Dr Jane Langdale, and her team at the University of Oxford, are working on the puzzle of which genes are involved in creating the internal structures within the leaf that function like a C4 plant. This has involved testing around 30,000 genes to see which ones are regulators for the switch from C3 to C4 photosynthesis.

Researchers estimate there could be up to 20 genes involved in creating the structures needed for the leaves to function like a C4 plant.

It's not yet clear how long it will take to add these genes to the prototype. It took six years to add the five genes governing C4 biochemistry using traditional cross-breeding.

But because of rapid advances in genetics, it is now possible to insert up to 10 genes directly into a plant and then see how that plant develops, Prof Furbank explained.

"And if we need to alter anything, it's just a six-month process. If one of those genes doesn't do what we were hoping, we can modify it and do another transformation very quickly and get a result back."

That process, called synthetic biology, will greatly speed up the quest for super rice, though it will take some years yet before the C4 consortium researchers know if they will succeed.

The C4 Rice Project "is like putting a man on the moon", Prof Furbank said. But he's optimistic that the team will succeed within the next decade. "Evolution has already created C4 photosynthesis many times in the past, so we know it's possible."

In the meantime, Prof Furbank and other scientists are also working on other tools that can help crops adapt to a hotter and more extreme world.

Scientists are looking at ways of introducing genes from other organisms that increase the amount of light a plant absorbs during photosynthesis, making it more efficient. For example, some blue-green algae can absorb light across a broader spectrum and Prof Furbank's team are putting those genes into plants.

Another is to use genes from algae which have special structures that pump CO2 inside their cells and inserting these genes into plants to improve CO2 efficiency.

Meanwhile, Prof Furbank's colleague at the ANU's School of Biology, Dr Rob Sharwood, is screening cotton varieties looking for heat tolerance. He is studying the agave plant, which is adapted to living at 50 deg C in the desert, and putting agave genes into wheat and cotton to help them better withstand higher temperatures.

Another way is to tweak the existing genes in crops and use high-speed tools to screen plants with better photosynthetic traits. The latter is part of what Prof Furbank calls the "plant Olympics" in which digital-imaging technologies allow rapid measurement of plant attributes and crop performance combined with artificial intelligence to find the best-of-the-best.

However, he said, to make a quantum improvement, "I believe you really have to start looking for genes from elsewhere or modifying genes that are in rice to make them more like other species that are able to survive at 50 degrees or are much higher yielding."

The ultimate test, though, will be taste and nutrition for any super crops, especially C4 rice.

"It must still look like a rice plant, grow like a rice plant and produce grain that is nutritious and equivalent to what people are used to," he said. And it must be able to produce good yields under future climate scenarios.

"We need to bring all of these tools to bear. Because we just can't do it fast enough at the moment to get to where we need to go."

A version of this article appeared in the print edition of The Sunday Times on November 11, 2018, with the headline 'On the cusp of another green revolution'. Subscribe
Topics:
More
Whatsapp Linkedin FB Messenger Telegram Reddit WeChat Pinterest Print Purchase Article Copy permalink