CHRISTCHURCH • Smelling of fresh paint, the two mosques in the New Zealand city of Christchurch where a gunman killed 50 worshippers just over a week ago reopened their doors yesterday, with many survivors among the first to walk in and pray for those who died.

At the Al Noor mosque, where more than 40 of the victims were killed by a suspected white supremacist, prayers resumed with armed police on site, but no graphic reminders of the mass shooting, New Zealand's worst.

Mr Aden Diriye, who lost his three-year-old son Mucad Ibrahim in the attack, returned to the mosque with his friends.

"I am very happy," he said after praying. "Allah is great to us. I was back as soon as we rebuilt, to pray."

Most victims of the shooting, which New Zealand Prime Minister Jacinda Ardern quickly denounced as a terrorist attack, were migrants or refugees and their deaths reverberated around the Islamic world.

Prince El Hassan bin Talal of Jordan, who visited the Al Noor mosque yesterday, said the attack assailed human dignity. "This is a moment of deep anguish for all of us, all of humanity," he said.

Police said they were reopening the nearby Linwood mosque, the second to be attacked during Friday prayers on March 15, as well. 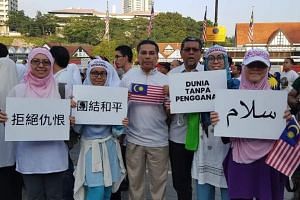 Malaysians march for peace and solidarity with Christchurch shooting victims

New Zealand has been under heightened security alert since the attack, with Ms Ardern moving quickly with a new tough law banning some of the guns used in the shooting.

Mr Ashif Shaikh, who was in the Al Noor mosque on the day of the massacre in which two of his housemates were killed and who was back there yesterday, said he would not be deterred.

"It is the place where we pray, where we meet. We'll be back, yeah," he said.

Earlier yesterday, about 3,000 people walked through Christchurch in a "march for love" as the city seeks to heal from its tragedy.

Carrying placards with signs such as "He wanted to divide us, he only made us stronger", "Muslims welcome, racists not", and "Kia Kaha" - Maori for "stay strong", people walked mostly in silence or softly sang a Maori hymn of peace.

Most of the dead were laid to rest at a mass burial in Christchurch last Friday, when 26 victims were interred.

Others have been buried at private ceremonies, or repatriated to their home countries for funerals.

Mr Shahadat Hossain, whose brother Mojammel Haque was killed in the attack, told Reuters he would bring his body back to Bangladesh.

"I don't know when our family will be able to come out of this grief," he said.

New Zealand, which has already charged two people for distributing the gruesome livestreamed video of the attack, has now also made it a crime to share the alleged killer's "manifesto", according to local media.

In the document, the alleged gunman Brenton Tarrant says the killings were in response to what he termed a Muslim "invasion" of Western countries.

A version of this article appeared in the print edition of The Sunday Times on March 24, 2019, with the headline 'NZ mosques that were attacked reopen; many 'march for love''. Subscribe
Topics:
More
Whatsapp Linkedin FB Messenger Telegram Reddit WeChat Pinterest Print Purchase Article Copy permalink