WELLINGTON (REUTERS) - New Zealand's police chief said on Monday (March 18) that they are certain there was only one attacker involved in the mass shooting in Christchurch last week.

"I want to definitely state that we believe that there was only one attacker responsible for this horrendous event," Police Commissioner Mike Bush told a media conference.

"That doesn't mean there weren't possibly other people in support, and that continues to form a very, very important part of our investigation," he added.

Australian Brenton Tarrant, 28, a suspected white supremacist, was charged with murder last Saturday. He was remanded without a plea and is due back in court on April 5, when police said he is likely to face more charges.

Prime Minister Jacinda Ardern said on Monday that she would announce new gun laws within days, after 50 people were killed in mass shootings at two mosques in the city of Christchurch.

"Within 10 days of this horrific act of terrorism, we will have announced reforms which will, I believe, make our community safer," Ms Ardern said at news conference after her Cabinet reached in-principle decisions on gun reform laws in the wake of New Zealand's worst ever mass shooting.

In addition to the 50 killed, dozens were wounded at two mosques in the South Island city during Friday prayers last week. 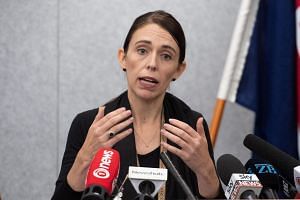 The owner of a New Zealand gun store said Tarrant had bought firearms and ammunition online from the store, but it did not sell him the high-powered weapon used in the massacre.

"The MSSA, military-style automatic, reportedly used by the alleged gunman was not purchased from Gun City. Gun City did not sell him an MSSA, only A-category firearms," Mr Tipple told a news conference in Christchurch.

Under New Zealand gun laws, A-category weapons can be semi-automatic but limited to seven shots. Video of the gunman in one mosque showed a semi-automatic with a large magazine round.

"We detected nothing extraordinary about the licence holder. He was a brand new purchaser, with a brand new licence," he said.

The shock of the attacks has led to calls for an immediate tightening of laws to restrict access to some firearms, particularly semi-automatic weapons.

Mr Tipple said he supported Ms Ardern's call for gun law reforms, as the Christchurch shootings had raised legitimate concerns. New Zealand, a country of only five million people, has an estimated 1.5 million firearms. The minimum age for a gun licence is 16, and 18 to own a semi-automatic weapon.

A Radio New Zealand report, based on police data secured through an Official Information Act request, said more than 99 per cent of people who applied for a firearms licence in 2017 were successful.

A New Zealand standard A-category firearm licence is issued after a police and background check. No licence is required to buy a large round magazine, which can be illegally modified for use in such a weapon. Only firearm owners are licensed, not weapons, so there is no monitoring of how many weapons a person possesses.