However, conservative Prime Minister Bill English appeared to be in the driving seat to form a government due to tensions among the opposition parties that would need to unite to unseat him.

English's National Party performed strongly in Saturday's election to claim 46 per cent of the vote or 58 seats, three short of the 61 needed to win.

The main opposition Labour Party, led by charismatic newcomer Jacinda Ardern, polled a disappointing 35.8 per cent to take 45 seats, although that rises to 52 if the seven seats of close ally the Greens are included.

It means that both English and Ardern would need the nine seats held by Peters' New Zealand First party to get over the line and reach the majority required to form a government.

He was holed up in his North Island electorate Sunday awaiting calls from English and Ardern pitching their case for his support.

"They'll try to make a decision but they won't have the cards that matter," Peters said.

"We know what we have to do responsibly. We're going to talk as a political party, as a caucus and as a board and when we've made our decision we'll then start talking to other people about what we might do."

Asked why Peters should back English, National campaign director Steven Joyce said his party's 46 per cent of the vote clearly showed it had more support than Labour.

"We'll be able to work well with New Zealand First. There's a number of our people have good relationships with not just Winston but his team," he told TVNZ.

"So let's just see how that plays out. The prime minister will start on that today."

'It's up to Winston Peters'

Labour campaign director Phil Twyford said Peters, known for his anti-immigration and protectionist policies, had more in common with the centre-left party than National.

"It's about who can put together a majority and I believe that we're well and truly in the game," he told the state broadcaster. 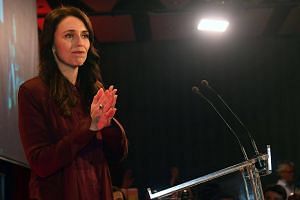 New Zealand Labour leader says will not yet concede election

"There's much more policy alignment between New Zealand First and Labour. They're committed to a much more hands-on approach to economic management."

During the campaign, Labour dismissed a NZF policy to hold a referendum on the future of the seven seats reserved specifically for the indigenous Maori population.

However, Twyford said Sunday he could not dismiss the possibility of it being part of negotiations.

"I can't say that now and I won't because the coalition discussions are going to start today. I think all those issues are going to be on the table," he told TV3's The Nation.

"Our position is very clear on that, people know where we stand on the Maori seats. We support them." An added difficulty for Ardern's Labour is that it must bring together two bitter foes in Peters and the Greens if it is to gain office.

The Greens angered Peters by labelling his anti-immigration rhetoric racist earlier this year and he warned there would be "consequences".

Greens leader James Shaw appeared downbeat about the prospect of the notoriously cranky septuagenarian forgetting past differences to join Labour and the Greens.

"Look, it's not likely, right, but if you look at the fact that the three opposition parties together have 61 seats... it is possible. We could form a government," he said.

"As everyone says, it's ultimately up to Winston Peters."