WELLINGTON • New Zealand's cliffhanger election ended in a stalemate yesterday, leaving it up to a small, anti-immigration party led by a maverick populist to decide whether conservative Prime Minister Bill English or his youthful Labour challenger Jacinda Ardern forms the government.

Mr English said he would talk with New Zealand First (NZF) party leader Winston Peters in the coming days and that his National Party, which won 46 per cent of the vote, was in the strongest position to deliver a stable government.

Ms Ardern refused to concede, saying she too will speak with Mr Peters and her ally, the Green Party, to try to secure a majority. Labour won 35.8 per cent of the vote.

On the final count, Mr English's National Party and current ally ACT had 59 seats, two shy of the 61 needed to win. Ms Ardern's centre-left Labour Party and its preferred partner the Greens were on 52, still needing another nine.

That means neither can govern without Mr Peters' NZF, which claimed nine seats.

The campaign has been the most volatile in recent memory, with momentum swinging from Mr English to Ms Ardern and then back again. Only two months ago, National had looked assured of victory as Labour languished in the polls. 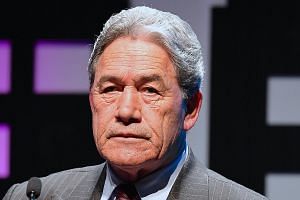 Populist party likely to be kingmaker

But "Jacinda-mania" started to fade in the final days under relentless attack from National over its economic credentials and a lack of clarity on tax policy in the face of Mr English's promise of tax cuts and a continuation of steady economic management.

Ms Ardern appeared deflated addressing the party faithful after the vote, saying she had given her all and apologising for not achieving enough. "Of course, we were hoping for higher. Obviously we hoped for better," she said.

She said she still hoped to become prime minister as part of a Labour-Greens-NZF coalition, despite Mr Peters' historic differences of opinion with the Greens.

"I simply cannot predict at this point what decisions other leaders will make," she said.

"There's still a lot in play at the moment," she added, refusing to throw in the towel. "I don't expect there will be any conversations for a little while yet."

In contrast, the 55-year-old Mr English was bullish about his chances of securing a fourth-term government for National, a feat that has not been achieved in New Zealand in more than 50 years.

He pointed out that National out-polled Labour and the Greens combined, saying voters had shown a clear preference for the centre-right party. "We go into negotiations with the intention of forming a stable government which enables this country to deliver for New Zealanders," he said.

The result helps Mr English make amends for his last leadership foray in 2002, when National slumped to a record defeat and won barely 20 per cent of the vote.

Nevertheless, even though National remains the biggest party in Parliament, there is no obligation for Mr Peters to choose it over Labour. Mr Peters has shown in the past that he will back either side if the right offer is made.

Making the task harder for Mr English, the tiny Maori Party, whose two lawmakers helped National reach a majority in the last Parliament, has failed to secure any seats.