Prime Minister Jacinda Ardern announced the ban as part of sweeping changes to the country's gun laws in the wake of last Friday's attacks on two mosques in Christchurch that left 50 people dead and dozens wounded.

At a news conference, she said the terror attack highlighted the weakness of the country's gun laws.

"I am announcing that New Zealand will ban all military-style semi-automatic weapons. We will also ban all assault rifles," Ms Ardern said, while announcing interim measures that will stop a rush of purchases before legislation on the measures takes effect.

She added that high-capacity magazines and devices similar to bump stocks - which make rifles fire faster - will also be banned.

"In short, every semi-automatic weapon used in the terrorist attack on Friday will be banned in this country," she said.

In short, every semi-automatic weapon used in the terrorist attack on Friday will be banned in this country... The vast majority of New Zealanders will support this change. I feel incredibly confident of that.

For the guns that are still out there, Ms Ardern announced a buy-back scheme that will cost between NZ$100 million (S$93 million) and NZ$200 million, depending on the number of weapons received.

"(To) the current owners of the weapons we have moved to ban, I acknowledge that many of you will have acted within the law," Ms Ardern said. "In recognition of that and to incentivise their return, we will be establishing a buy-back scheme."

Anyone who keeps the guns after an amnesty period will face fines of up to NZ$4,000 and three years in jail.

Ms Ardern brushed aside suggestions of opposition to the ban.

"The vast majority of New Zealanders will support this change. I feel incredibly confident of that," she said.

The lone gunman who carried out last Friday's attacks was armed with semi-automatic rifles, including an AR-15. 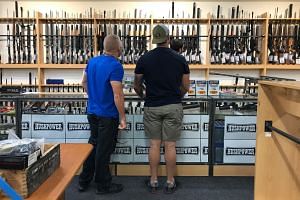 Don't give terrorists the fame they crave

Australia banned semi-automatic weapons and launched a gun buy-back after the Port Arthur massacre in 1996 in which 35 people were gunned down. The AR-15 was used at Port Arthur. It has also been used in a number of high-profile mass shootings in the United States.

Ms Ardern said that similar to Australia, the new gun laws will allow for strictly enforced exemptions for farmers to conduct pest control and animal welfare.

Most farmers in the South Pacific country own guns, which they use for killing pests such as possums and rabbits, and for putting down injured stock.

The changes exclude two general classes of firearms which are commonly used for hunting, pest control, stock management on farms and shooting ducks.

Recreational hunting of deer, pigs and goats is also popular for sport and food, while gun clubs and shooting ranges dot the country.

That has created a powerful lobby which has thwarted previous attempts to tighten gun laws after other mass shootings in New Zealand and overseas.

Federated Farmers, which represents thousands of farmers, said it supported the change.

"This will not be popular among some of our members, but after a week of intense debate and careful consideration by our elected representatives and staff, we believe this is the only practicable solution," Federated Farmers Rural Security spokesman Miles Anderson said in a statement.

"I have a military-style weapon. But to be fair, I don't really use it, I don't really need it," said Mr Noel Womersley, who slaughters cattle for small farmers around Christ-church. "So, I am quite happy to hand mine over, to be fair."

Ms Ardern said a further tranche of reforms will cover the firearm registry and licensing.

Both mosques to reopen today; nation to observe 2min silence

CHRISTCHURCH • The bullet-riddled Al Noor Mosque in Christchurch is being repaired, painted and cleaned ahead of Friday prayers, as grieving families buried more victims of New Zealand's worst mass shooting.

Prime Minister Jacinda Ardern has announced that today's call to prayer for Muslims will be broadcast nationally, and there will be a two-minute silence.

Armed police have been guarding mosques around New Zealand after 50 people were killed last Friday by a lone gunman who attacked worshippers at two mosques in Christchurch.

"We will have a heightened presence tomorrow in order to provide reassurance to people attending the Friday call for prayers," police said in a statement yesterday.

"Police have been working relentlessly, doing everything in our power to gather all appropriate evidence from what are active crime scenes so we can allow people to return to the mosques as quickly as possible," they added.

The two mosques targeted by the shooter - Al Noor and nearby Linwood - plan to reopen today. Thousands of worshippers are expected at Al Noor, where the majority of victims died.

Most victims were migrants or refugees from countries such as Pakistan, India, Malaysia, Indonesia, Turkey, Somalia, Afghanistan and Bangladesh.

Australian Brenton Tarrant, 28, a suspected white supremacist who was living in Dunedin, on New Zealand's South Island, has been charged with murder following the attacks.

The first victims were buried on Wednesday and burials continued yesterday, with the funeral of a schoolboy.

Families of the victims have been frustrated by the delay, as under Islam, bodies are usually buried within 24 hours of death.

A mass burial is expected to be held today. Body washing will go on through the day and night to have the dead ready for burial, said a person involved in the process.

Police said yesterday that all 50 people killed had now been identified, allowing burials to take place. "All of the next of kin have been advised," said Police Commissioner Mike Bush.

Twenty-nine people wounded in the attacks remain in hospital, with eight still in intensive care.

Many have had to undergo multiple operations due to complicated gunshot wounds. The gunman used semi-automatic AR-15 rifles, with large magazines, and shotguns.